Terry Bogard (テリー・ボガード) is an American fighter and the older brother of Andy Bogard. He is often referred to as the Legendary Hungry Wolf (from Garou Densetsu, meaning Legend of the Hungry Wolf). 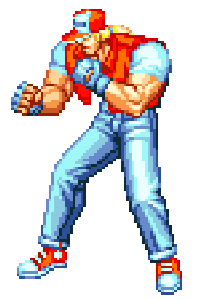 Terry Bogard () is the main character of the Fatal Fury series. He has appeared in every Fatal Fury game, and is one of the characters of choice to symbolize the company in crossover games, merchandise and publicity. He appears to fit many Japanese stereotypes for an American character in appearance, personality and speech (his in-game vocabulary is usually limited to American colloquialisms, such as "Okay!" and "Hey, c'mon, c'mon.").

Terry Bogard is the brother of Andy Bogard. Both of them were orphans adopted by Jeff Bogard. He is often referred to as the Legendary Hungry Wolf (from Garou Densetsu, meaning Legend of the Hungry Wolf). He has a pet monkey named Ukee (the previous mascot of SNK before Terry) and is said to have the unique ability of accurately guessing a woman's measurements just by glancing at her. He also has a knack for shooting three-pointers or free throws in basketball, which explains the creation of his Power Dunk move.

Terry comes from the fictitious town of Southtown, U.S.A. (a setting for many SNK games), and is the adoptive son of Jeff Bogard. During his childhood, he witnessed the death of his father at the hands of Geese Howard. Terry chose to pursue his revenge at a later time. But unlike his brother Andy, who left Southtown to train in Japan, Terry chose to stay in his hometown, combining the skills learned from his father with abilities gained from the streets.

At the time of Fatal Fury, the crime lord Geese Howard organized a tournament, dubbed The King of Fighters. Terry, Andy and Muay Thai Kickboxing champion Joe Higashi would enter with the purpose of facing Geese. The battle that followed would eventually see Terry defeating Geese, and for some time, it was thought that Geese perished in the battle. The next year saw Geese's half-brother Wolfgang Krauser take control of The King of Fighters, and bringing the once Southtown-only tournament onto the world stage (as shown in Fatal Fury 2). The finals of this new tournament would again see Terry fighting the sponsor and him ultimately defeating Krauser.

Some time later it was revealed that Geese had survived his encounter with Terry. The Bogards and friends learned of Geese's intentions to retrieve the legendary Jin scrolls, Terry once again challenged and defeated him. Defeated, Geese fled and Terry battled to the end of the tournament, defeating characters such as Ryuji Yamazaki, until finally facing the Jin brothers Chonrei and Chonshu. These events take place in Fatal Fury 3.

In the Fatal Fury games , Terry wears a red denim vest with a star on the back (with sometimes the words 'Running Wild' beneath the star) worn over a short-sleeved white T-shirt shirt, sometimes with tattered sleeves, fingerless gloves (biker/fighting gloves), jeans and a pair of red Chuck Taylor All Star shoes. He tops it off with his trademark red-and-white baseball/trucker cap, with the words Fatal Fury on it (and sometimes Neo-Geo or King of Fighters). Terry wears his blonde hair long, but keeps it tied in a ponytail with bangs around his forehead/cheeks.