Joe Higashi (ジョー・ヒガシ) is a champion of Muay Thai and a good friend to Andy Bogard. Although Joe's place of origin is Japan, he spent the majority of his time at Thailand, where he trained Muay Thai. It was through his victories that Joe got the nickname "Hurricane Upper" Joe Higashi. 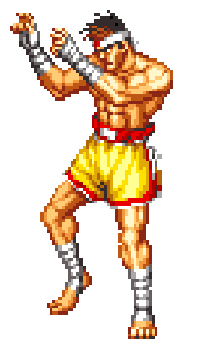 Joe earned his title as the champion of Muay Thai by beating Hwa Jai in a Muay Thai only tournament. Hwa Jai later joined the King of Fighters tournament in order to exact revenge against Joe but failed, and after admitting his defeat they're good friends and sparring partners. Ever since then, Joe has been defending his title against lesser opponents. Joe then met Andy Bogard and assumed that he is superior to Andy in an exhibition match. Joe was wrong as he was defeated. Realizing that he was much slower than Andy, Joe congratulated Andy for his tenacity.

Andy then offered Joe a chance to join him on a quest to Southtown in order to help him and his brother Terry exact revenge against Geese Howard, the man responsible for the death of their father Jeff Bogard. Although Joe understands that he risked expulsion from the Muay Thai Federation for this, Joe accepted Andy's offer and then went to the King of Fighters tournament to support the Bogards unconditionally. While both Andy and Joe were not able to fight Geese, Joe did his job in helping the Bogards out. Terry managed to defeat Billy Kane and later on bested Geese on top of the Geese Building. Joe then returned to Thailand to defend his title.

However, his recess turned out to be short-lived when a German brute named Wolfgang Krauser attacked his archrival Hwa Jai without warning. Joe was forced to enter the King of Fighters tournament to investigate the truth behind Hwa Jai's beating. While Joe tried to prove that he was much stronger than the Bogards, he could not do so and all he could do was provide support for the Bogards again. Joe then helped Terry and Andy defeat Billy, Axel Hawk and even Laurence Blood.

Years later during a party attended by Andy and Mai at Richard Meyer's Pao Pao Cafe 2, the Jin Twins crashed it and boasted a claim of recovering the Jin Scrolls, a family heirloom that can grant immortality. The twins challenged all of Southtown to see who was the best fighter to obtain the scrolls. Joe was one of the fighters intent on making sure the Jins never got the scrolls. He faced the twin's bodyguard Yamazaki, and was knocked unconscious from one blow.

When he awoke, Geese Howard, thought to have died, was holding the Jin Scrolls. Joe's story continues in his Real Bout profile.