Ryuji Yamazaki (山崎 竜二) is a psychotic criminal from southtown who is best known for his unhonorable fighting style and his mental unbalance. He worked with the Jin Twins to protect them and the scrolls of immortality in Fatal Fury 3.

Story (in the Fatal Fury Series)[edit] 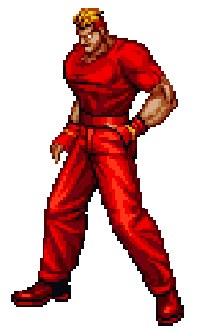 In contrast with most of the other fighters in combat video games, Ryuji Yamazaki does not use any particular martial art - he is a self-taught brawler, and uses a wide variety of attacks in his fighting, including unfair and dishonest moves such as kicking sand in his opponent's eyes, and his ever-present knife. He also rarely takes his right hand out of his pocket unless he is using his knife.

During the events shown in Fatal Fury 3, Yamazaki was signed up by Jin Chonrei and Jin Chonshu to protect them and the scrolls of immortality. He is one of the boss characters in that game (the other two being the Jin brothers) and can not be controlled by the player.