Billy Kane (ビリー・カーン) is a fighting game character who hails from England, loves punk rock and plays the guitar very well. He fights with a weapon that can be either used as a bo or as a three section staff, which he can ignite with fire. He always tries to look out for his little sister Lilly Kane. 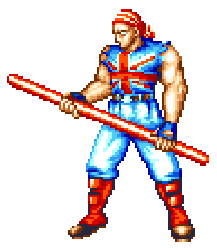 Billy and his sister, Lilly were orphans in London until they were spotted by South Town crime lord,Geese Howard, who was on business trip in Europe. He takes the orphans in after seeing Billy use a staff in battle.

Billy was groomed to be Geese's head bodyguard and righthand man. Geese would hold The King of Fighters tournament every year with Billy as his champion. Billy was the undefeated champion of the tournament, until he was defeated by Terry Bogard in Fatal Fury, who moved on to defeat Geese. Billy came to Geese's aid at the end of the fight and took him to the hospital. Billy swore revenge against "The Lone Wolves" Terry, Andy Bogard and Joe Higashi.

After Geese's apparent death, Billy went back to England with his sister. In order to adequately provide for her, Billy continued his life of crime and joined Wolfgang Krauser. He competed in Krauser's King of Fighter tournament where it was revealed that he was working for a still living Geese to overthrow Krauser. He never finished the mission because Terry Bogard defeated Krauser.

Geese returned, planning to use The Scrolls of Immortality to become a god, in Fatal Fury 3. Billy (while being an NPC) was with Geese during these events. Billy's story continues in his Real Bout profile.

Billy Kane is only a playable character in the SNES version of Fatal Fury. He does not appear at all in the Genesis version.