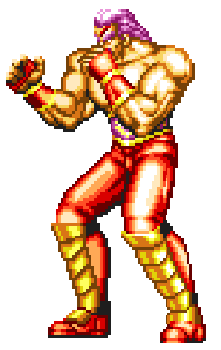 Wolfgang Krauser hails from Germany and is titled Earl of the House of Stroheim. Krauser is also the half-brother of Southtowns king of crime Geese Howard. He lives in Mittelbirge Castle in Germany, the home of the Stroheim for many years. In addition to earning the title of Earl of Strolheim, Krauser received right-hand personnel service from a matador named Laurence Blood (a cold and ruthless bull-fighter). Although Wolfgang Krauser sponsors Laurence's matador activities, for many years the Blood clan of Spain has been serving the Stroheim House as Right-Hand Personnel, much like Billy Kane has been serving Geese as his right-hand man.

While Krauser seems to have an evil nature when in battle, in reality, he's not, as he has a very gentle side outside the battle ring. He simply sees no justification for mercy or place for righteousness in battle. Krauser believes that he committed no transgression whatsoever, as he only fights brutally in the battle ring and only for personal gain. Krauser also appears in the Real Bout series.