Mai Shiranui (不知火) is the granddaughter of Hanzo Shiranui, master of Ninjitsu and Koppo-ken. Mai learned from her father the secrets of Ninjitsu, and became an expert in stealth and other sneaky tricks. She is deeply in love with Andy Bogard, though their relationship is unclear most of the times.

Story (in the Fatal Fury)[edit] 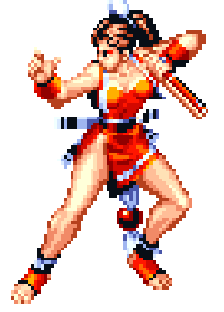 Mai Shiranui is the granddaughter of Hanzo Shiranui, master of Ninjitsu and Koppo-ken and learned the secrets of Ninjitsu to become an expert in stealth and other sneaky tricks. Although her beauty has brought her many suitors, she rejects all who propose to her, considering them "weak." However, one day she became obsessed with a young boy by the name of Andy Bogard.

Andy had come from Southtown in the United States to train under the orders of Hanzo Shiranui in Kopo-ken. Mai then had to take alternate courses from her grandfather's friend, Jubei Yamada in Ninjitsu. However, far from hating him, Mai fell instantly in love with the American kid, since he was suitably strong and handsome. However, Andy paid little attention to Mai, too absorbed in his training. Mai, on the other hand, had even made plans as to when Andy would marry her.

After they grew up, Andy became a good-looking young man, and Mai a very attractive woman who received marriage proposals from dozens of men. However, Andy decided to travel back to the United States and reunite with his brother Terry Bogard to exact revenge on Geese Howard, the man who killed their father.

Mai was infuriated by this desertion, but had no choice but to stay and keep training. She knew that Andy would come back one day. Not much time later, Andy returned to Japan in order to continue his training. He found out that his fighting in Southtown had been for the wrong reasons; not for the real sense of fighting, but for personal vengeance. In addition, Andy left Southtown with unresolved emotional problems and a resolve to gain honor in fighting. Mai did not care for any of this, she just wanted Andy to be close to her again. So, when Wolfgang Krauser decided to go out in search of worthy fighters, she followed Andy to fight Krauser.

Mai did well in the tournament but did not win. Afterwards, Mai chose to stay close to Andy wherever he went. Years later, Mai and Andy were at the grand opening to the Pao Pao Café 2, where the Jin Twins challenged the strongest fighters in South Town. She fought with Andy and the others but was unable to stop Geese Howard from taking the Jin Scrolls of immortality.