Cheng Sinzan (チン・シンザン) is a greedy and power-hungry businessman from Taiwan. Although he is not really evil, his main intention is always to increase his status and wealth. 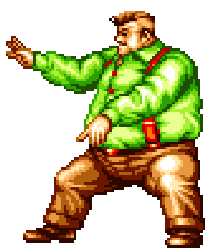 Ever since he can remember, Cheng Sinzan has always fought his way to become a man with a higher social status. The man who had money was the man who would be respected, and with that basis in mind, Cheng began to slither his way up the social ladder, via many dirty management tricks and betrayal. However, he also knew that this sort of actions would gain him many enemies who would try to finish him off at the slightest chance. Being a man of wide dimensions, the idea of becoming a prominent martial artist escaped anyone's mind.

But Cheng made it in the end, by training himself in the unpredictable art of Tai Chi Ken, which allowed him to channel his inner energy and launch as actual chi blasts. Cheng also used his own weight to his advantage, as he was capable of lunging himself like a ball all around the place, and once he got going, he would be hard to contain.

After establishing many business spots and shopping locals using his "influences", Cheng's ambition grew stronger. He felt that with his money and with his overwhelming strength, he could topple anyone.

Suddenly, the news that the renowned German noblesman, Wolfgang Krauser, has organized a new worldwide tournament using the name of a small local competition called "King of Fighters", and that he was seeking only the best. Aside from proving himself to be a distinguished fighter, Cheng realized he could win a lot of money from the prize cash, or he could raid Krauser's massive heritage fortune as well!

Unfortunately for his reputation, Cheng didn't make it so far into the tournament, but he managed to sponsor many of his fights via his dirty money, so the broadcast of his fights earned the fat businessman a decent amount of earnings. Although he didn't gain enough money as he would have wished, something is better than nothing, so Cheng sits back and relaxes, knowing he has gained enough with not so much effort!

Although his intentions are not really evil, Cheng's incredible amount of greed and hunger for money blinds him from more important matters. Only interested in becoming a rich man at any cost, Cheng usually overlooks many situations, in such a manner that when he tries to find out what's going on, he usually finds himself in big trouble. Nevertheless, the ambition of Cheng could be as big as his own stomach. Cheng also appears in the Real Bout series.