Laurence Blood (ローレンス・ブラッド) is a skillfull and famous matador from Spain. He is a loyal servant of Wolfgang Krauser von Strolheim. 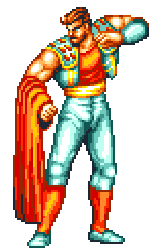 A renowned bull fighter not only in Spain, but in lots of parts in the world, Laurence Blood might be an arrogant and overconfident person who likes to minimize other people's successes, but he can sure back it up, by showing off his skills as a matador, and how he gracefully dodges the charges of bulls, and kills them swiftly in one stroke of his sword.

But few people suspect what is behind Laurence's incredible career. Ever since he was little, Laurence's family had had close ties with the Earl of Strolheim, represented by the Krauser family, a very influential lineage in Europe. Having served the Krauser family for generations, the Blood clan has always played the role of faithful followers to the Strolheim lineage. Laurence has not forgotten that vow, and has served the latest successor of the Strolheim heir, Wolfgang Krauser, in exchange that Krauser himself would support Laurence's training as a bull fighter.

The trade faired off quite well, as Krauser had a respected and feared bodyguard in the form of Laurence, and Laurence himself had earned a name for himself in the bull fighting arenas, where he is famous for his gracious moves with his cape, and the fatal swipes of his sword. Always the man who knows how to pay his debts, since he too is of noble heritage, Laurence attends to Krauser's call, when the Emperor of Darkness decides to host the second King of Fighters tournament, in hopes of finding the man who had defeated Geese Howard in the first tourney.

Laurence was in charge of protecting Strolheim Castle while Krauser was out trashing worthy opponents to prove his might. But Laurence did not count on the power and courage of the "Lonely Wolves" Terry Bogard, Andy Bogard and Joe Higashi, who had already demonstrated their amazing prowess by defeating Geese the last year. Although Laurence was a formidable opponent, being both quick and deadly, he ultimately fell to the strength of the lonesome trio, and had to act as a faraway witness to his lord's fall. After Krauser's defeat, Laurence vanishes from the bull fighting scene, possibly to serve his master Krauser for all eternity to make up for his incompetence. Laurence also appears in the Real Bout series.