Kaphwan Kim (김갑환) is a master of taekwondo, and also considers himself a fighter of justice. Since Kim was young and during his taekwondo training sessions, he was always reminded to fight for justice, and use the martial art as a way to accomplish this. 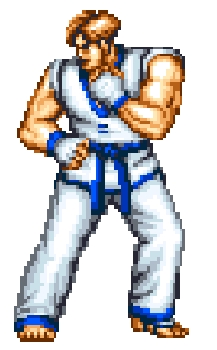 Kim Kaphwan (キム・カッファン) is the reigning Tae Kwon Do champion of the world. Kim has been able to use this in his favor and fight against the best fighters on the planet.

Kim is the reigning Tae Kwon Do champion of the world. He first traveled to Southtown to fight Wolfgang Krauser in the King of Fighters tournament. On the way, he encountered the "Lone Wolf" Terry Bogard. They soon became very good friends, and ever since, Kim always agrees to help Terry in all that he can, though a definite rivalry is maintained.

After his introdiction in Fatal Fury 2 he has appeared in many other games, including all of the 2D King of Fighters games. Kim's story continues in his Real Bout profile.