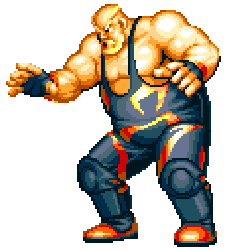 Big Bear grew up the Australian prairies where he trained his body to become incredibly strong. He tired of country life and became pro-wrestler, where he beat his competitors with ease. He moved to South Town, looking for a challenge and adopting the identity Raiden. After seeing him fight, Geese Howard was impressed enough with his skill to make him a member of his gang. He entered the King of Fighters tournament created by Geese, but was finally defeated by Andy Bogard.

After the fall of Geese's empire, Raiden goes back to Australia. He decides to totally reinvent himself leaving his ego and attitude behind. He became now known as Big Bear deciding to wrestle just for sport and not honor or glory. He was invited to the new King of Fighters world tournament held by Wolfgang Krauser, but despite his training was still defeated. This time however, he did not feel as bad and became friends with Terry, Andy and some of the other tournament competitors.

When Geese returns, Big Bear refuses to join him to regain his empire.