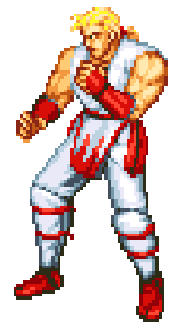 Andy practices the Shiranui-ryuu Ninjutsu and a form of empty-handed ninja combat called Koppouken, which he trained in after witnessing his foster father's murder in order to gain revenge on Geese Howard. Mai Shiranui is his fiancée, and the granddaughter of Hanzo Shiranui, the man he learned Ninjitsu from.

It was after his foster father Jeff's death that Tung Fu Rue took responsibility for raising himself and Terry. Andy went to Japan to train under Hanzo and grew up alongside Mai, while Terry stayed in South Town.

During Andy's time in Japan, he met the Muay Thai fighter Joe Higashi, and challenged him to a match. When Andy won, he invited Joe to return to America with him to enter the King of Fighters tournament, held by Geese. Before this, Andy had rarely, if ever, seen Terry in the interim since Jeff's death. Andy quickly grew jealous of Terry because Terry was taller, older, and quite possibly a better fighter, and unlike Andy, Terry did not practice a grueling daily training regimen.

Late in the tournament, Andy tried to kill off Geese by himself. Geese's power proved to be too much for Andy as he almost fell to his death. Terry saved Andy, who finally acknowledged Terry as the better of the two brothers.

Andy's emotions prevented him from reaching the final round, but when Terry defeated Geese, Andy felt a sense of closure and returned to Japan to continue his training. News of the death of his master, caused Andy to train harder than before and become the greatest fighter in the world.

After Terry beat Geese at the end of their first King of Fighters Tournament, a new tournament was held, this time hosted by Wolfgang Krauser. Andy, while present in the tournament, once again lost out to Terry.

Years later during a party attended by Andy and Mai at Richard Meyer's Pao Pao Cafe 2, the Jin Twins crashed it and boasted a claim recovering the Jin Scrolls, a family heirloom that can grant immortality. The twins challenged all of Southtown to see who was the best fighter to obtain the scrolls. Andy was one of the fighters intent on making sure the Jins never got the scroll. He faced the twins bodyguard Yamazaki, but underestimated him and Andy was knock unconscious.

When he awoke, Geese Howard, thought to have died, was holding the Jin Scrolls. Andy's story continues in his Real Bout profile.