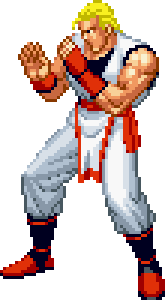 After Geese Howard obtains the Jin Scrolls, Geese holds another "King of Fighters" tournament. Andy stubbornly demanded that he face Geese alone, despite the fact that he had a chest wound during the events of Fatal Fury 3. He goes off to train for the tournament. During the tournament, Terry convinces Andy to fight Geese together. The Bogard brothers face Geese but they are picked off and Geese defeats Andy. Andy is hospitalized but makes a full recovery.

During the events surrounding Garou: Mark of the Wolves, Andy retires from fighting and has trained a new student in Hokutomaru. He enters Hokutomaru into that latest "King of Fighters" tournament to see how far he's progressed. Andy watched the boy the entire time and when he went back to see his master, Andy was gone. He only left Hokutomaru a note, saying that he is proud of him and that they are not master and student, but rivals.