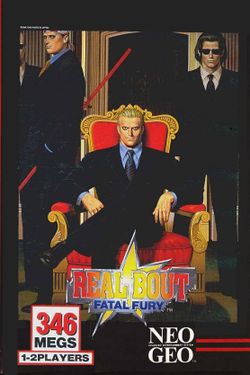 Real Bout Fatal Fury continues right where Fatal Fury 3 left off. At the end of the last game, Geese Howard obtains all the sacred Hidensho scrolls. But his plans are foiled when the Jin brothers destroy them. Shortly afterwards, Geese holds another King of Fighters fighting tournament.

All the characters from Fatal Fury 3 return, as do Kim Kaphwan, the Duck King and Billy Kane from previous installments.

The game is very similar to its predecessor but still has a few big changes. The

button is changed from an attack button to one that strictly does plane shifting. The other big change Desperation/Hidden Desperation attack system has been replaced with the S. Power/P. Power system requiring a power a separate power bar to do super moves.

The game is best remembered for the canonical death of Geese Howard, refusing help from the Bogard brothers and falling from Geese tower.