Alfred (アルフレッド) is a pilot an old bi-plane with his co-pilot, John. He taught himself how to fight and idolizes Terry Bogard. 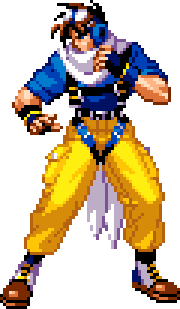 Alfred has two separate but similar beginnings to his story

Beginning 2: Born and raised in a small village in the countryside, Alfred idolized John, a 62 year old pilot. John became a hero in the village after he defeated a Russian MiG in a dogfight. Alfred looked up to John as a father figure after his own father died 10 years prior in an accident. Suddenly, Alfred's village was taken over by a criminal organization lead by White as their new base of operations. Alfred and John escaped the village in John's old bi-plane.

Alfred (and John) visited many places across the globe and met many people. He created his own fighting style that emulates the movements of an airplane and he grew stronger on his travels. The plane had suffered a slight mechanical failure and he had to make a forced landing in the forests near Southtown. He found that White and his criminal syndicate had taken over the city. With the help of Terry Bogard, Alfred defeated White. After a celebratory banquet attended by Terry, his brother Andy and their allies, Alfred (and John), with the plane repaired, flew off into the sunset.