White (ホワイト) is a powerful crime boss and the final boss of Dominated Mind. With mind control abilities he can make people his living puppets. He is possibly inspired by the character of Alexander DeLarge from the movie, A Clockwork Orange. 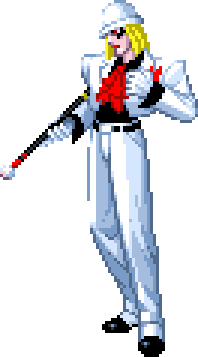 White is renowned as a dangerous crime lord, in control of one of the most dangerous weapon and drug dealing organizations in the world. He has incredible psychic powers that allow him to look into the mind of any person, and enable him to manipulate their thoughts to his pleasure. With his powers, White took the criminal world by storm, even going as far as making his bases of operations unassuming to law enforcement. One of the places that he made his own base of operations was a small village where a young pilot called Alfred lived. White's ultimate ambition was to gain complete control of Southtown after the death of Geese Howard. With Geese's bodyguard, Billy Kane, under his control, White quickly took over the city.

White's downfall came at the hands of the "Lonely Wolf" Terry Bogard and Alfred, the boy whose village he took over. Afterwards, White was never heard from again.