Iori Yagami (八神 庵) is the heir to one of the three clans that sealed the legendary snake entity, Orochi, 1,800 years ago. As the leader of the Rivals Team he is a central reoccurring character and the initial enemy -and eventual rival- of Kyo Kusanagi. 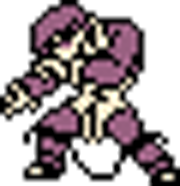 Iori's inclusion in Real Bout Fatal Fury Special was as a non-canon boss character and he has no story for his appearance.