Sokaku Mochizuki (望月双角) descends from a lineage of exorcists and can conjure spirits during several of his attacks. 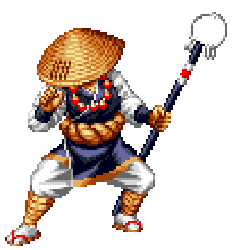 The ancestors of Sokaku Mochizuki have been known throughout history as people with the ability to summon wandering spirits from the netherworld and use them against evil demons who appear in the world of the humans. Their main task is to seal away any possible threat to this world that might come from another realm. As an heir to this tradition, Sokaku has devoted himself to his training, preparing himself both physically and mentally for the time his services might be needed.

Having been secluded in a Buddhist temple for a long time, Sokaku knows little of the outer world. He only travels when the forces of evil grows strong in the mortal coil. Always wandering with his huge straw hat, his Buddhist prayer beads, and his purification staff, Sokaku seeks and vanquishes any evil spirit who might be causing trouble.

Not without his share of trouble, Sokaku has engaged himself in a personal war with the Shiranui ninjitsu clan, a rivalry that has been raging on for centuries even. It is said that the Shiranui ninjas differ with the unnatural powers of the Mochizuki clan, and consider it dangerous to possess. Sokaku himself has faced the past leader of the Shiranui ninja clan, Hanzo Shiranui, several times, with mixed results, no match ever defining a clear winner. Now that Hanzo has died, Sokaku keeps a close eye on Hanzo's granddaughter, Mai Shiranui, so she may not interfere with his job.

During the events of Fatal Fury 3, the demons of the Jin family began to surge again, embodied in a malevolent plan: the two children Chonrei and Chonshu (who are the descendants of the Jin) would use the Scrolls of Immortality to attain eternal life and the possibility to control the world forever. Sensing that the balance of good and evil was about to be shifted, Sokaku travels to Southtown, current location of the Jins in the United States, in hopes of dealing with the ominous force at work behind the curtains.

Sokaku was about to face both Jin brothers alone, but was too late as Geese Howard had the scrolls. Sokaku's story continues in his Real Bout profile.

Hidden Desperation can only be performed directly after being hit by