A legendary master of Hakkyokuseiken, Tung Fu Rue (タン・フー・ルー) was the former master of both the noble Jeff Bogard and the power hungry Geese Howard. 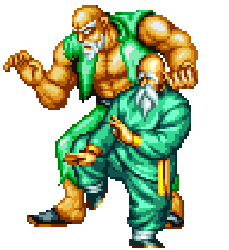 Tung Fu Rue taught Jeff Bogard as well as Geese Howard when they were still boys. While Geese made it no secret that he would use Master Tung’s teachings to assault those who stand in his way, Tung taught the youth regardless. As time went by, Jeff was quickly becoming an honorable and skilled martial artist, with two boys he himself adopted as his sons. Geese though was becoming more arrogant and more ruthless than before. When Tung was ready to choose an heir to the Hakkyokuseiken art, he picked Jeff. This decision brought the wrath of Geese, who promised vengeance.

In an act of cowardice, Geese killed Jeff and rose to prominence by taking over Southtown. After mourning the death of his intended successor, Tung sought out Jeff’s sons. Still harboring a hatred for what Geese did to their father, the brothers Terry and Andy were given an opportunity by Tung to train in the way of martial arts. While Terry trained himself in Southtown, Andy went to Japan to be trained by Hanzo Shiranui, Tung’s old friend, in Shiranui-Ryuu Koppou Ken. Tung knew the two needed to train to stand a chance against Geese, if they just went after him in the state they were in; he would have killed them too. With both boys gone, Master Tung went into isolation.

Ten years later, Tung reunited with the adult Bogard brothers. With Andy’s friend from Japan, Joe Higashi, Tung and the brothers entered Geese’s King of Fighters tournament in the first Fatal Fury game. He seeks to find out which one of the brothers is worthy of his teachings by testing them himself. Master Tung was a force to be reckoned with in the tournament while still monitoring the progress of Terry and Andy. While Andy’s desire for revenge would have eventually made him exactly like Geese, it was clear to Master Tung that Terry’s ambition for fighting skilled challengers reminded him of himself when he was young. Hence Tung taught Terry the secrets of the Hakkyokuseiken style.

Fatigued, Master Tung finished Terry’s training and told him to defeat Geese. Terry does this, knocking Geese out of the top floor from Geese Tower. Tung knew that Geese was still alive and Terry would find eventually, but by then Terry would be ready when the time came. Currently, Master Tung’s whereabouts are unknown.

The only canonical appearance of Tung Fu Rue is his appearance in Fatal Fury. In this game, Tung would 'buff-up' into a muscular version after he took a certain amount of damage. In later (non-canonical) games, his muscular version would only appear while performing certain special moves. Tung also appears in the Real Bout series.