Duck King (ダック・キング) is a fighter, DJ and bar owner who grew up in one of South Town's many ghettos. His fighting style uses a combination of various forms of dancing (mainly breakdancing).

Story (in the Fatal Fury Series)[edit] 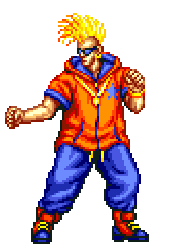 A Southtown native, Duck King grew up in an impoverished family in the city’s ghetto. It was in this poor district where he would take interest in fighting and even a greater interest in music and, even more so, dance. He spent a great deal of time with breakdancing and the B-boy culture so much so that it became a part of his life. Duck King began to go to frequent nightclubs as his dancing skills vastly improved. His overwhelming and thrilling antics on the dance floor worked its way into a fighting style of Duck King’s own design.

Using his fighting style to confuse other fighters in the ghetto’s West Subway, Duck King started to create a reputation with the fighters in Southtown. When news of Geese Howard’s King of Fighters tournament broke, an excited Duck King jumped at the chance to enter. While being an odds on favorite, Duck King was manhandled by the Lonely Wolves (consisting of Terry Bogard, Andy Bogard and Joe Higashi), more specifically, Terry (as Duck King hates his Rising Tackle).

After his loss, Duck King went back to the ghetto to develop his fighting style to flow with the rhythm of battle. Around this time he met up with the bouncer, King and the two pulled together enough money to start a massive bar in Southtown. Here King’s King of Fighters tournament matches were hosted with Duck King acting as the DJ for the bar.

During the events of Fatal Fury 3 and Real Bout Fatal Fury, Duck was invited to Richard Meyer’s new night club, the Pao Pao Café 2. The grand opening was spoiled by the Jin twins Chonrei and Chonshu who wrecked the café. They sought the Jin Scrolls which were stolen from them. These scrolls eventually end up in the hands of Geese Howard, who was once thought dead.