King is a female bouncer/bar owner from Southtown who acts and dresses very masculine most of the times. 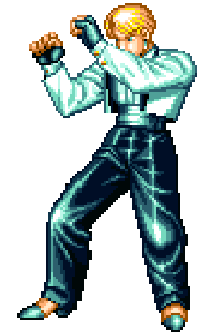 King's story begins in Thailand. When King was a little girl, she was sent to Thailand in order to learn Muay Thai with her younger brother Jan. King has always assumed a motherly role for her brother and she cares for him deeply. Despite being a woman, she was clearly a skillful Muay Thai fighter who could hold her own in a match. However, she could not fight in an official tournament because she was a woman.

The following year a mysterious fighter known only as "King" entered the tournament. All the fighters were surprised by an enigmatic fighter with short blond hair and a shirt. This was, of course, King posing as a man. She advanced to the finals with relative ease. At the finals, King faced off with the current Muay Thai champion (not Joe Higashi). The fight was pretty even, but the man named only "King" was getting the upper hand. In a rage burst, the champion took hold of King's shirt; King kicked him back in retort. By holding on after the kick, the champion tore off her shirt, revealing King's secret to the crowd ... she was a woman. Everybody was dumbfounded. The organizers considered the final invalid, and threw King away. The humiliated King traveled to the United States, where she would begin a new life with her brother Jan. This humiliating experience caused her to develop an intense conflict with her sex. This shirt-tearing experience can be relived in the games. In Art of Fighting (and a small number of related games, namely The King of Fighters '94), if you used a special move to defeat King, her shirt rips open to reveal that King is a woman and not an effeminate man.

King began working for a mysterious criminal named Mr.Big as a bouncer in his restaurant. She was apparently reading the works of Gertrude Stein while working there. Her stage is set in the aforementioned restaurant. This is where she first came into contact with Ryo Sakazaki and Robert Garcia. King fought Ryo in this restaurant disguised as a man. His true business was with Mr. Big, but Ryo needed vital information from King on how to find him. She refused to answer out of loyalty to her employer. Ryo was oblivious to the fact that she was really a woman and battled her with all his might. The match was close, but he eventually won. Realizing that King wasn't really a bad person, he reached his hand out to help King. Her shirt had been ripped in the carnage and Ryo was surprised to learn that King was a woman. King had never been treated with such respect before, and developed great respect (or more likely, a crush) for Ryo Sakazaki. She helped him find his sister Yuri and quit working for Mr. Big shortly after Art of Fighting.

After the first game, she bought a bar of her own in Southtown with Duck King from Fatal Fury where she was barwoman and he was DJ.

If you pick King as your first opponent in Art of Fighting 2 (single player mode), you will fight the other contestants in the following order: