Kasumi Todoh (藤堂 香澄) is the daughter of Ryuhaku Todoh, the first enemy in the original Art of Fighting. She is a deciple of the Todoh school of Aikido and Kobujutsu, taught to her by her father. She is looking for revenge against Ryo Sakazaki for bringing dishonor to her father and her whole family. 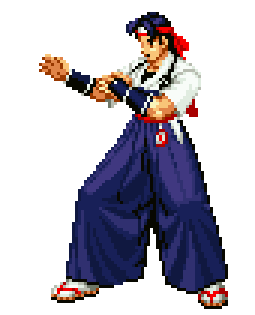 Kasumi grew up learning the Todoh school of Aikido and Kobujutsu, taught to her by her father. As her family's sole heir, she does all she can to stand up for the Todoh way. When Ryuhaku stayed at Southtown to settle an old score with a man named Takuma Sakazaki, Kasumi remained in her house, waiting for her father's return. A couple of months later, she got some bad news: Ryuhaku had been defeated by Ryo Sakazaki, Takuma's son and hasn't been seen since. She decided to fight Ryo and anybody else in order to avenge her father. Unfortunately enough, her mother, Shizuka, did not like that idea.

But Kasumi eventually makes peace with Ryo and returns to Japan with her mother.

She is the only new character from Art of Fighting 3 to ever appear out of this franchise as a playable character.