Yuri Sakazaki (ユリ・サカザキ) is the younger sister of Ryo Sakazaki and the daughter of Takuma Sakazaki. She is the first and only known female practitioner of Kyokugen Karate. 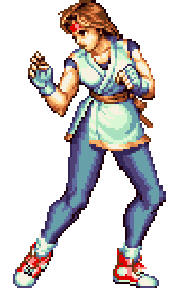 Yuri Sakazaki (ユリ・サカザキ) is a video game character from SNK's Art of Fighting series first as a damsel in distress and then as one of the protagonists.

Yuri is the daughter of Takuma Sakazaki and Ronnet Sakazaki and the younger sister of Ryo Sakazaki, who is four years her senior. When she was an infant, her mother Ronnet died of natural causes, leaving Takuma to raise her and her big brother Ryo alone. Takuma dedicated more time to Ryo than to Yuri, as Ryo is to be the heir to the throne of Kyokugenryu Karate. However, he did not turn his back on Yuri. Yuri later befriended a new boy who had just arrived from Italy, who is Robert Garcia. She enjoyed having conversations with Robert and developed a special relationship with him, but her father and brother insist on breaking up the relationship. However, she considers Robert one of her most valuable friends and enjoys being with him.

When she was 17 years old, Yuri was living in her father's Kyokugenryu dojo when crime began to infest the city of Southtown. Geese Howard blackmailed Takuma into working for him and became the de facto boss of Southtown, and ordered Takuma to kill Jeff Bogard, the adoptive father of Terry and Andy Bogard. Takuma refused to do so, but in order to force Takuma to cooperate, when Geese was out on business, Geese ordered Mr. Big, a local criminal mastermind, and Mr. Big's henchmen to break into the Kyokugenryu dojo. Mr. Big and his henchmen refused to answer Yuri's questions. Yuri then realized that they were up to no good. She initially managed to escape, but she could not run fast enough to keep the henchmen from catching up to her and was abducted in order to get Takuma firmly under Mr. Big's control and supervision so that Takuma would not disobey Geese. Takuma was forced to do things against his will through repeated threats to kill Yuri, which includes fighting Ryo and Robert. Yuri was worried about her father, Ryo, and Robert. Unfortunately, her abduction caused her brother Ryo and her love interest Robert to tear up Southtown in search of her, and in the process, they fought the toughest criminals, bouncers, and martial artists. A hidden door to the dark room was suddenly opened, and she narrowly escaped. Her brother Ryo was prepared to finish off Mr. Karate using a Haoushoukouken on him, believing he was behind the kidnapping. However, in order to rescue her father, she came unscathed and appeared before the eyes of Ryo and Robert and told Ryo not to hurt Mr. Karate, saying that he was really their father. Takuma removed his mask to reveal his true identity, revealing that he was deceived by Geese through Mr. Big to fight his own son Ryo. Immediately thereafter, they had a joyous reunion.

After the reunion, the Sakazakis and Robert returned to the Kyokugenryu dojo and plotted revenge against Geese for disgracing the honor of Kyokugenryu Karate. After Yuri rescued her father Takuma, and as a vehicle for revenge, she asked him to train her in the art of Kyokugenryu Karate about the same way he trained Ryo, much to Ryo's opposition and Robert's favor. Takuma accepted the offer, eager to make his daughter into a powerful fighter in her own right and prevent her from being abducted again. He trained Yuri behind Ryo's back, and she made exceptional progress in quite a few days. Yuri uses the lowest-grade Kyokugenryu Movelist in the discipline, called the Raiou principle, which taught only the basic and low-level moves and encouraged personal instinct to be used in conjunction with the tutelage. Among Yuri's personally-crafted moves are the Slipstream Handslap and the Big Butt Press. Yuri chose to remain in the Raiou principle of Kyokugenryu Karate. Takuma offered her the incentive to advance to the higher principles of the discipline. However, she rejected that offer, believing that the higher principles of the discipline focused more on offense rather than on defense. Kyokugenryu Karate had never been taught to females until the Yuri Sakazaki Incident; therefore, Yuri received the honor of being the first female student of the discipline.

If you pick Yuri as your first opponent in Art of Fighting 2 (single player mode), you will fight the other contestants in the following order: