As Bulma, Goku, and Oolong arrive at a new town, they are greeted by a large rabbit, who goes by the name Boss Rabbit (aka Monster Carrot). He offers to shake hands with Bulma, and proceeds to turn her into a carrot just by touching her. Oolong sends Goku to save Bulma by catching Boss Rabbit and forcing him to change her back. 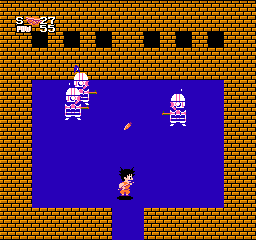 As soon as the stage begins, you will see Boss Rabbit hopping off to the right. You must chase after him, although you will never really be able to catch up to him. As you proceed through the towns, you will pass a number of huts with doors. Goku will be able to enter every door that he sees.

A majority of the doors contain some enemies and capsules. But four particular doors contain three members of the Rabbit Gang, and a single carrot. The scene looks very similar to the screenshot below the map. Your goal is to collect all four carrots before reaching the end of the stage and challenging Boss Rabbit to a fight.

As you make your way through the town, you will fight against a variety of enemies, such as Rabbit pods and members of the Rabbit Gang. The Rabbit Gang members carry guns that they will fire at you, so approach them carefully.

The second portion of the stage is a little more maze like than the first portion, but not terribly so. Continue to investigate each door that you encounter, in hopes of finding each of the four carrots. Once you have collected all four carrots, you can follow Boss Rabbit into the final house at the end of the map. However, the door will not open for you if you are missing any of the carrots. 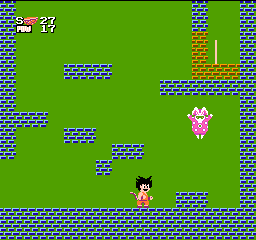 Once you have collected all four carrots, you can enter the door in the last building. Yamcha will appear in an effort to help you fight the Boss Rabbit. He does so by attempting to reclaim the Bulma carrot while you take on Boss Rabbit directly. Of course, Goku can't touch the rabbit with his bare hands without being transformed into a carrot, so he needs his trusty Power Pole. If you managed not to collect it throughout the stage, one will be positioned in the upper right corner of the room for you. Make sure that you do not attack Boss Rabbit without it.

Once you have the pole, proceed to attack Boss Rabbit with it. You must make sure that you do not make any contact with the rabbit, or the game will be over. Boss Rabbit starts out by jumping into the right corner of the room. You can get in a few attacks while he does this, but keep your distance. Eventually, he will start bouncing to the left, and around the room. Your safest position is indicated in the screenshot to the right. Here, you can typically stab the Rabbit with the pole whenever he gets close, and he will bounce off the platform above your head instead of hitting you when he moves.

Once the Boss Rabbit is defeat, Goku forces him to transform the carrot back into Bulma, which he does. Then Goku uses his Power Pole to send the Rabbit to the moon*. Bulma returns to her senses and they continue on their journey for the final Dragon Ball.

* Japanese folklore states that the Moon Rabbit is a rabbit that lives on the moon. The legends about the moon rabbit are based on markings of the moon that resemble a rabbit pounding mochi, a Japanese rice cake.