Goku successfully completes his battle against Krillin and advances to the next level of training.

For the second level of Goku's training, Goku must spar against staff wielding monks. The staffs give the monks much greater reach and defense. He must defeat four monks on the lower portion of the level in order to open the door to the inner shrine. There is a secret cave entrance identified on the map where you will find two flames, two fireball traps, and a single capsule. You may get lucky and the capsule may contain a Power Pole.

Another four monks wait to fight Goku beyond the door. They must all be defeated in order to open the door to the chamber beyond. These monks require two hits to defeat. Once again, try not to engage more than one at any given moment. 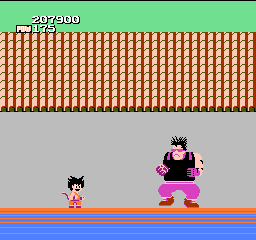 The second battle that Master Roshi arranges for Goku will be against the Metal Soldier. As big as he is, the Metal Soldier doesn't require an incredibly complex strategy. You can pretty much hold a particular position and punch his knee until he is defeated. Every time you punch him, you will be pushed back a small distance, so advance forward a little bit after each punch. The Metal Soldier will alternate between punching down at Goku, and over Goku's head. The lower punch is the only danger, but if you punch the Metal Soldier before he throws his punch, Goku should be pushed out of range. When the Metal Soldier's health is low, he will begin throwing projectile punches. Each punch will be followed by a fist that flies through the air. If you maintain the same strategy, you may get hit by a low flying punch or two, but you should be able to defeat him before he can do a lot of damage to you.