Goku successfully completes his battle against Yamcha and advances to the next level of training.

For the final level of Goku's training, Goku must spar against staff wielding wolf-monks. Like the regular monks two stages ago, the wolf-monks gain the same reach and defense bonus. These are the toughest opponents that you will fight during your training. You need to defeat four of them before you are granted access to the inner shrine. Because of the limited amount of health, it would be a good idea to start using Kame Hame Ha attacks against these monks. You can take the two right-most monks out with one attack if you have the Super Kame Hame Ha shells that let you throw three blasts simultaneously. Then you can move to the right, and take out the remaining two with one more blast.

Another four wolf-monks are waiting for Goku beyond the door. They must all be defeated in order to open the door to the chamber beyond. It will be difficult to use one Kame Hame Ha attack against the two lower monks, but you can definitely remove the two upper monks with a single blast. There happens to be a secret cave entrance on the left side of the screen if you walk north into the crevice, and push against the right wall. Inside, you will find an unusual room with six stationary capsules. These capsules will open up on their own, one at a time. If they contain insects (and many will), the insects will instantly attack Goku. 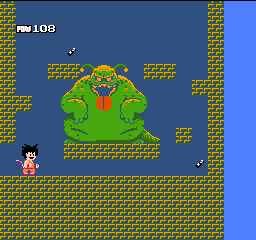 For the final battle, Master Roshi pits you against the incredibly large King Byon. This immense enemy sits in the middle of a cramped room full of little platforms. He has two attacks; two little electric sparks that are emitted from his antennae, and sweeping his long tongue across the bottom of the room. It turns out that much of the floor beneath him can be chipped away in order to create a passage below him and over to the other side of the room. While that will give you a little more room to maneuver, it won't help you much. It appears as though King Byon is immune to just about every form of attack that you can throw at it. You'll have to think of another way to defeat him indirectly.

How to beat King Byon 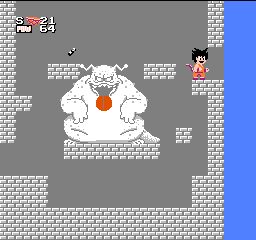 Allow the sunlight to enter

The only way to defeat King Byon is to exploit his weakness to sunlight. In order to do this, you must make your way over to the right side of the room, climb up to the top platform against the wall, and poke a hole in the wall that allows the sunlight to shine through. It can be difficult to reach the top sometimes, as you have to time the jump between sparks. If you succeed in defeating King Byon in this manner, Master Roshi will congratulate you and compliment you on your cleverness.