When Goku completes his training with Master Roshi, he decides that it is time for him to go on a quest to find the Number 4 Dragon Ball that his grandfather gave to him as a keepsake. It has been one year since the last time the balls were brought together. Using Bulma's Dragon Ball radar, Goku sets out to find the balls on his own. The first one he seeks is on the moon. Unfortunately for him, and old nemesis awaits him there and hasn't forgotten their last battle.

When Goku arrives on the moon, he suddenly discovers that he is unable to breath, due to the lack of oxygen. A lady informs him that he must find Oxygen tanks in order to continue breathing. These tanks ironically do nothing more than add 5 power points back to Goku's health, which does not appear to drop any more rapidly than usual in the absence of breathable air.

The moon appears to be undergoing an unusual amount of meteor activity, with rocks falling out of the sky wherever Goku moves. Two Oxygen tanks can be found as Goku travels to the right, along with two moon enemies that Goku must defeat in order to access the area beyond the door to the far right. There is actually on hidden cave entrance in the lower right corner of the stage. Stand just to the left of the lower portion of the right-most rock and walk into it. You will find three stationary capsules inside. 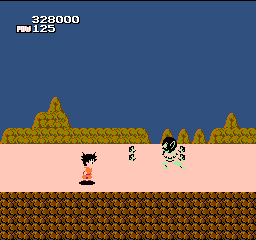 Boss Rabbit makes his presence known once Goku steps foot inside the door. He has not forgotten about their last battle, and sends one of his best hitmen to fight against Goku, a four armed man named Krilian. You will enter a fight with Krilian on a single screen stage on the moon. Although he has a lot of hit points, he's really not much hard to defeat than the wolf-monks that you faced during your Kung-Fu training. In fact, the same strategy will work. If you stand just a few pixels above him, you will be able to throw continuous attacks at him, and ultimately defeat him while taking very little damage in return. When Krilian is defeated, you must walk off the right side of the screen to conclude the battle. 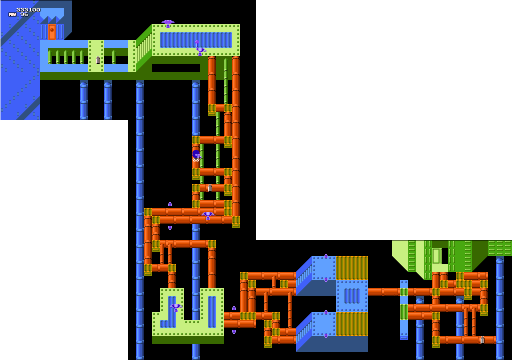 Upon defeating Krilian, you will be granted entrance to the inside of the moon base. Theoretically, oxygen is still a problem for Goku, so more tanks can be found and collected within. More moon enemies will guard the way, including stationary pods with boxing glove like appendages. Most of these can be safely avoided and ignored. When you get past two of these, you will need to begin traveling down.

Move down the set of pipes, avoiding more enemies, and collecting the oxygen tank that you encounter. Eventually, you will have to pass between two posts that become electrified at regular intervals. You cannot pass these posts when they are electrified, you can't even jump over them, so don't try or you will take damage. Wait until the electricity clears. Keep moving down to the bottom of the map, and proceed walking to the right again. You'll have to clear another set of posts.

Walk up either set of stairs and avoid the electrified posts at the top. Then defeat the one enemy that awaits you there. Defeating him will cause the pipe to the right to extend and connect to the platform that Goku is standing on, allowing him to proceed to the right. Two last enemies guard the entrance to the end of the stage, so you must defeat them in order to open the door. One last oxygen tank can be collected, but it's out of the way, and may actually cost you more power to collect than what you will gain from it. 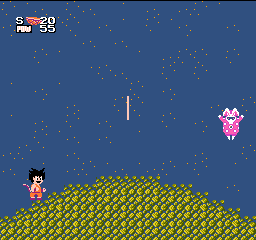 Angered by your success, Boss Rabbit challenges you to fight directly. He threatens to turn you into a carrot once and for all. It is unlikely (but not impossible, thanks to the hidden cave in the first map) that you have collected the Power Pole, but fortunately, one is simply provided for you at the start of this fight. It sits over the moon, and you need only jump up to grab it.

The strategy for this fight is no different than your first fight with Boss Rabbit. The only major difference is the lack of platforms over Goku's head for Boss Rabbit to jump on. You'll have to be extra careful not to be underneath the rabbit as he jumps back and forth. Move to where he once was and turn around to stab him with your pole, than repeat the process until the rabbit's health is depleted. It will only take a few whacks, but if the rabbit touches Goku just once, the game is over.

At the fight's conclusion, Goku will discover a Dragon Ball, but regretfully, it's not the one given to him by his grandfather. His search continues.