With three Dragon Balls already reclaimed, Bulma determines that the fourth one can be found deep inside the jungle. Son Goku is pleased with the idea of returning to the jungle, but Oolong, a self-proclaimed city boy, is not as thrilled. 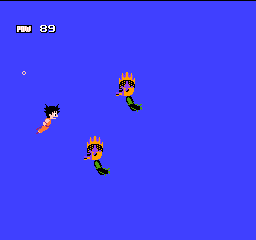 The jungle level starts off simply enough with a series of spider-like enemies that descend from the tree tops. They approach very slowly, and are extremely easy to defeat. After beating a bunch of them, you will reach a body of water. In order to proceed, you must jump in the water. What will appear next is a scene depicted in the screenshot to the left. You will encounter two aquatic enemies. They are strong and require a lot of hits to defeat. You will earn 2000 points if you defeat them, but the truth is, you can bypass them completely. Simply swim to the surface of the water, and you will immediately appear at the start of the second stage.

The second phase of the jungle is the longest. You will encounter three different enemies; pods on mechanical legs, bats, and a slime enemy that oddly resembles poo. Many rocks will hidden Goku's progress across the terrain. It turns out that Goku can smash many of them out of his way. You will see a building with a ladder that you can climb up to the roof. This is actually unnecessary if you punch the rocks below the building in order to access the door on the right side. There is actually a hidden entrance on the left side of the second building, near the lower corner, with three capsules.

When you approach the building door, you will have to punch it in order to enter. Inside, you will be surprised to find Master Roshi inside. Bulma will ask what he's doing there, and he will respond that he's on vacation. He will then inform Son Goku that a key can be found in a cave near the house. You will instantly enter the cave. It's similar to the one you already entered in the third chapter. Break all of the bricks until you find the key. Once you collect it, Master Roshi will insist that the tip for the key was not free. He will once again ask to touch Bulma's breasts, and Bulma will once again ask Oolong to change shape into her, and trick Master Roshi.

Once you leave the building, cross over the bridge to the right. Defeat the enemies that you encounter on the other side. You will find more rocks on the other side. Clear any that get in your way, and approach the next body of water. Jump in and swim to the top to get to the next map.

As an extraordinarily small section of the game, you will have to fight just two spider monsters before diving into the next body of water. Once you dive in, swim to the top to reach the forth map. 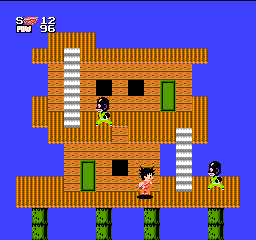 If you collected the key in the second map, the door of the building will open as soon as you approach it. If not, you will have to punch it in order to open it. Either way, Oolong will remark that there is a secret basement. Defeat the four enemies in the basement and exit through the back. You will end up in front of a bigger building, as depicted in the screenshot to the left.

In front of this building, you will have to fight two very strong fighters. Use similar techniques to the ones you used against the wolf-monks. Specifically, fight them while standing just a few pixels above their position. You should be able to strike them without getting hit back. Once you are done, you may enter the door and engage the boss in a fight. 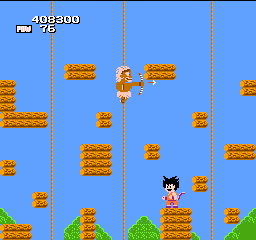 The fight against archer King Binbo can be rather difficult until you establish two platforms that you can switch back and forth from and easily attack the King (such as the second and third top platforms from the right). Once you find these two platforms, wait for the King to slide down the right rope. Attack him once while he is sliding down, then prepare to jump before he fires his arrow. As you are falling down from the jump, you should be able to perform a jump kick and hit him a second time. Then jump to the left platform and perform the same sequences. When the King occupies the rope that you are not positioned next to, simply reposition yourself back on the original platform and wait for the King to return to that rope. Eventually, you should knock him away.

Once you win, Bulma will collect the fourth Dragon Ball. Goku will once again be disappointed that it is not his grandfathers Dragon Ball.