Leave the throne room, then in the next room head to the staircase on the right. In that room you can buy some upgraded weapons and armor if you would like. After you do that, head to the stair case in the upperleft of the room. In this room go left and in the middle of the room you will see a Gnome in front of a secret room. Speak to him and he will open up the Underground Passage for you. Continue through the passage and you will eventually find yourself outside. 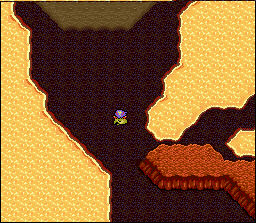 Once outside, go to the left of the door and head along the coast as far as possible. Now head straight up (ignoring all splits in the road and continuing north) until you can see some tanks. Head to the right side of the tanks. The tanks will attack the tower, allowing you to get through.

Inside the tower head straight through into the door ahead of you. In the next room follow the path until you get to the first door you come to. Go inside, the chest contains monsters, who drop a Blizzard Spear when you defeat them. This will be important for fighting Rubicant. Continue on to the door above you to the right. This will be a chest with monsters who drop the Ice sword. Continue on to the only other door in the room.

In the next room you will need to go to the right and take the first path north available. Continue all the way around until you reach the next door.

In this room there are two paths on the right. If you take the top path you will get to a save point. The bottom path will take you forward in the tower. Continue on to the middle of the room where you will see Dr. Lugae speaking with Rubicant.

After some dialogue, Dr. Lugae will attack the party. You'll be faced against the doctor and his robot. If you beat the doctor first, the robot will self destruct and bomb one of your characters for far more damage than they're probably able to survive. Attacking him first is thus not recommended. If you beat the robot first; the doctor will take direct control of it to continue fighting. Either way; once the fight is over, the doctor will turn into a new boss for you to fight. In his new form, he mostly prefers to drown the party in sleep and poison status effects.

Go backwards, down several levels and you will find the room with doors on the left and right side, and in the middle a bridge leading to a locked door. Use the key on this door, and you can get inside to stop the Cannon. After a few simple battles with guards, Yang will sacrifice himself to stop the cannon. Now you can continue all the way to the entrance of the tower.

When you are about to exit the tower, Golbez tries to kill you, but Cid saves you with his airship. Once You are in his ship, he will jump out of the ship, sealing the entrance to the underground, letting you escape. He tells you to return to Baron and speak to his engineers.

In order to reach Eblana, your next destination, you must use the hovercraft. Go into Baron Castle, and go down the stair case on the right. When you find yourself on the interior of the castle, speak to the engineers who will adjust the aircraft for you. Using the new airship, locate the hovercraft, which probably is still at Mt. Hobs. Position the airship above it and press the action button to pick it up.