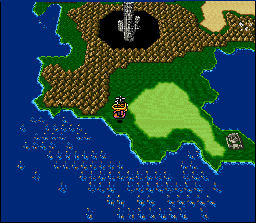 On the map find the Tower of Babil. At the bottom left of this island, you will see some shallow water and Eblan Cave. Drop the Hovercraft on land near the cave, and ride it to the entrance. 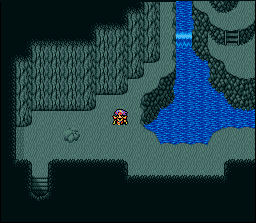 In the first room of the cave head immediately south, as far as possible and you will reach the next door. The next cave is the hideout of Eblana. Continue to the left, and you will see a staircase toward a door. Go through this door. In the next room head north, and the only door will take you onward through the game. 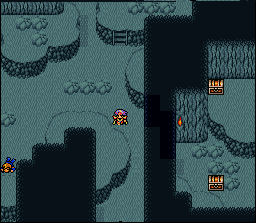 For this room, head to the fork in the path and take the one to the lower right. In the next room follow the path down, to the right, then up again and into the next cave. In this cave, the first door you see is a save point. Continue to the left of that door and you will come upon Edge. He will lose a battle with Rubicante only to join your team.

Re-enter the Tower of Babil[edit] 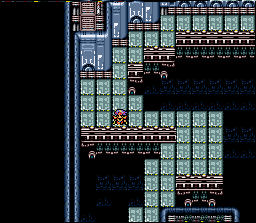 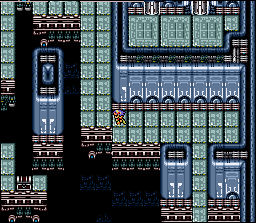 In this room go immediately to the right, and it will loop around to another door. 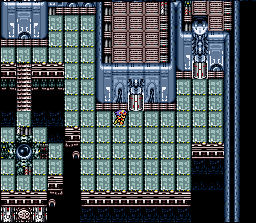 Upon entering this room go immediately to the right and you will see 2 doors. The first is a save point. The second will take you further, so enter this door. In the next room, just go through the door, then you will reach final room, where you will find the King and Queen of Eblan.

King and Queen of Eblan[edit] 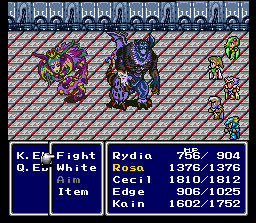 The King and Queen are being controlled by Rubicant. Just fight these guys for a little while (or just defend the whole time and only heal when needed), and a cut scene will take over. They will die on their own. After defeating them Rubicante will appear. He will give you a chance to equip yourself properly (Ice Weapons and Fire Armor). Before attacking he will heal you completely. 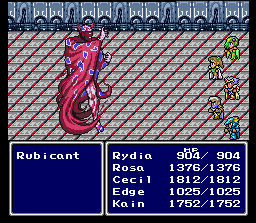 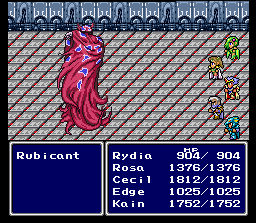 Rubicante can be difficult. He will rotate through spells (Fira, Firaga, and Scorch). Scorch (Glare) is particularly dangerous, as it will most likely kill a party member instantly if the single-target version is used and they don't have adequate fire protection. Rubicante only uses it when his cloak is open. Use ice weapons, Rydia's ice spells or Shiva, and Edge's Flood for most effective attacks. However, when he hides behind his cloak all elemental attacks will actually heal him, so wait for him to drop the cloak to attack. Casting a fire spell on Rubicante while his cloak is closed will cause him to cast Raise on all party members, allowing you to revive them easily should they get KO'd. 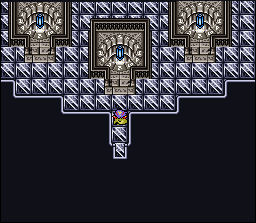 After defeating him a messenger from Eblan will come in and speak with you. After leaving head toward the door that Rubicante blocked, and you will be in the Crystal Room. When you try to take the crystal, you will fall into a trap. Continue along the path of the tower through 2 levels. 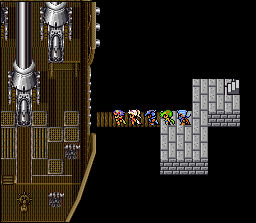 When you reach a room with a fork in it, take the path on the left. Through that door you will find an airship. After the cutscene, use it to reach the Gnome City. Speak with the King and he will tell you that the final crystal is in the sealed cave. Luca will give you the key. 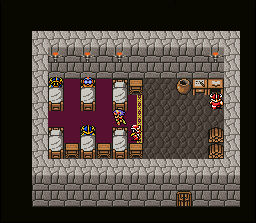 Go to the basement of the castle, and you will find Cid through the door. He will fix your airship so that it can fly over the lava. Now you can reach the Sealed Cave.

Tomra is in the south central part of the underworld, and has new equipment. Skip Diamond Armor and Shields, but buy Diamond Gauntlets and/or Helmets. Diamond gear protects against lightning. If Cecil or Kain have at least one piece each of Fire, Ice and Diamond gear, they'll be protected against all three elements. Because Fire and Ice gear are both only a shield and body armor, the Diamond gear has to be the helmet or gauntlets. It's the best setup for them until they get their best armor in the final dungeon.

The Tiaras also protect against lightning, and grant a big boost to Rydia's black magic. A nice piece for Rosa, and a must have for Rydia (but you should already have found one Tiara in Mist).

This would be a good point to attempt the Cave of Summoned Monsters. In order to do this easily, either Rosa should have learned the Wall spell or you should have the Mage Masher knife, but neither is actually required.