When you start the mission, you'll fly into the chaos vortex. You'll fly through pieces of buildings and find a couple enemies in the way. Take care of them as usual, then a bunch of eyes will appear right in front of you. A line of komaytos will appear, so Melee attack, and keep moving through enemies. A shadow hand will appear that makes pit stop. When he keeps going, beat those enemies and dodge the shadow hands until they stop.

Then you will be enveloped in darkness, but even with the color, you should still be able to spot enemies and kill them. When you come out, a hot spring waterfall will appear and you'll fly right through it. You recover little health but don't worry, there are recover orbs there. Enemies start to block your screen so keep you eyes peeled. Viridi will then warn you that you getting close to the chaos kin and to watch out for fakes. After a couple of enemy groups, rubble starts forming a ring path, and that's when several shadow versions of yourself start appearing with several weapons you may have used.

After little time, you turn around to look at a giant structure where the real chaos kin is located. Viridi will speed you up to catch up to it. Now you have to try your best to shoot him down and not let him get away. Several copies will appear along with other enemies. You can tell which one is the real chaos kin if you shot him a couple of times, then smoke should be coming out of him. Keep shooting while chasing him. He sometimes will come close enough for you to melee attack him, but he can still hurt you by shooting beams. Viridi will keep telling you to hurry up and kill him but don't worry just yet. After chasing him for a while, he will get stunned by hitting a rock. Now you have to kill him fast. If he gets away, you will get a game over because Viridi can't get Pit out, and leaves him trapped in the vortex. If you do beat him in time, he will fall down to a single platform below. Get ready for land battle. 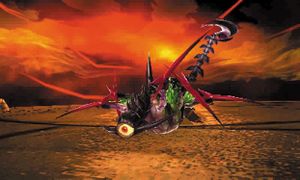