Multiplayer in Kid Icarus: Uprising is closely linked to the Single player portion of the game. Weapons and items can be earned and used in either mode, and the multiplayer portions of the game share the same basic gameplay as the Ground sections of the Campaign. There are two modes for both local and WiFi play: The team-based "Light vs. Dark" and the appropriately named "Free-For-All."

In this mode, players are split into two teams of three. Each team has a shared life bar in addition to their regular gauges. Every time a player is defeated, their team's respective bar goes down. The more powerful the player's weapon, the more the bar goes down, meaning that choosing a powerful weapon is a double-edged sword.

Eventually, when the team bar goes down to zero, the last defeated player on the team respawns as an Angel. The first time to defeat the opposing team's angel is the winner, so protecting your team's angel is a must. However, this is balanced by angels having more health and being more powerful in battle than normal Fighters.

Anywhere from two to six players battle each other for a set period of time. Any empty spots are taken by NPCs. Whoever scores the most points in that time is the winner. Points come from killing enemies, and the more powerful an enemy's weapon, the more points are earned. Each player can be identified by their color, which is random. 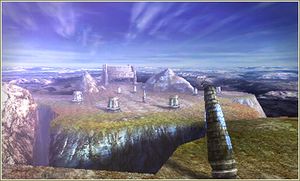 Rules that can be modified[edit]