Portal is an FPS unlike many others, simply because combat is not the focus of the game. Rather, it is about escaping through various challenges. The puzzles presented will test your reflexes and logic. Below is a list of obstacles and devices that you will encounter on your journey through the Aperture Science Enrichment Center's experiments. 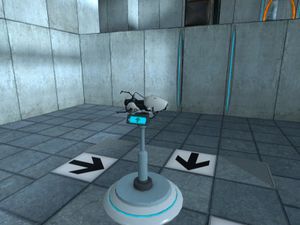 The first portal gun you encounter.

The "portal device" is your only tool, and holds immense power. With it, you can create either, or both, ends of a portal, and solve the various puzzles in each chamber. By default,

will create the blue end of a portal, and

Portals are the main method of getting around and solving puzzles in Portal. They are either created by the portal gun, or are pre-existing in a chamber. A portal has two ends; a blue end, and an orange end. You (or objects you send through) can travel between the two in either direction. One of the key features of portals is that momentum is conserved as you go through; if an object is going fast when it enters a portal, it will come out the other end at the same speed, regardless of any re-orientation which might occur. One important practical application of this is to climb up otherwise insurmountable objects: place one end of a portal at the bottom of a pit, and one facing the top of the object to be scaled, and then fall into the first end of the portal. You will be projected out of the second end and come to rest (if the portals have been positioned properly) on top of the previously-insurmountable object. 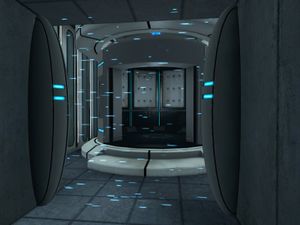 Chamberlocks are the exit points for a chamber, and the objective of each chamber is to reach them. In front of every chamberlock is an emancipation grid which will vaporize unauthorized material such as cubes, thus preventing (under normal circumstances) carrying objects to another chamber. 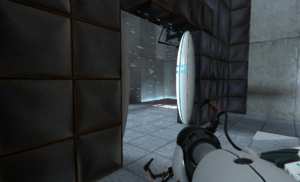 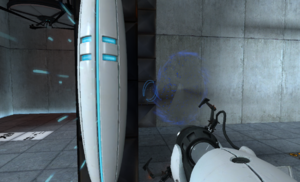 Portals disappear when you touch an emancipation grid.

Emancipation grids, also called emancipation grills, and often referred to as fizzlers, are boundaries which the player and portal gun may pass through, but unauthorized material, such as cubes and turrets, may not, and will be vaporized. They are usually located at the exits to chambers, but are also found elsewhere. Touching one of these also resets any current portals, so that if a player were to return to where a portal had been shot, it would no longer be there, and would need to be placed again. Portals also cannot be shot through this grid.

One of the several devices used to set puzzles in Portal is the superbutton (referred to in this guide simply as a "button", despite the normality such a description implies). They are typically linked to doors with clearly-visible tracks, but require a weight constantly on them to keep doors open; cubes are quite useful for this. 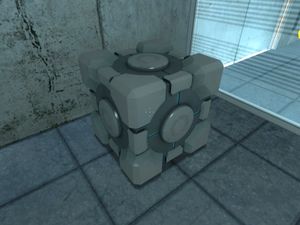 The stereotypical physics block; you can pick them up, move them around, throw them, and – more importantly – leave them on buttons, and push them through portals. They're simply referred to in this guide as "cubes". 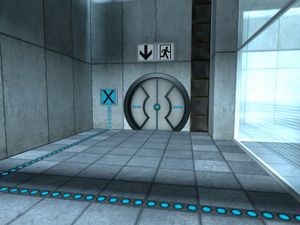 A closed door, showing the wires to it. 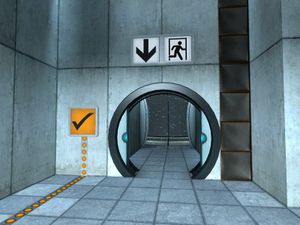 These are – at least to begin with – the main obstacle to progression through the chambers. Typically linked to buttons, doors will only stay open when the button is pressed. The button, or buttons, with which a door is linked can be determined by following the wires from the door to the buttons. 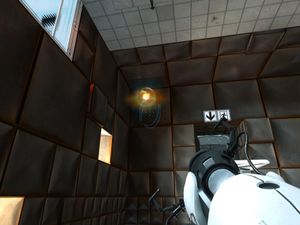 Pellets are small balls of energy also found in Half-Life 2. They are created and fired by pellet launchers, and should be directed towards pellet receivers, which will – like buttons – power things such as doors once they've captured a pellet. Be careful around pellets, as they will instantly kill you if you touch them. Remember that pellets will disintegrate if they are only bouncing off walls and objects for a few bounces — they need to go through portals to remain intact. Otherwise, energy pellets fade-out and disintegrate after a certain amount of time. 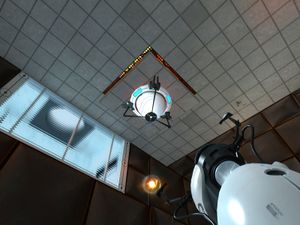 Pellet launchers create pellets. They will in most cases (exception being Chamber 18) only allow one of its own pellets at a time to exist, so will only launch a new pellet when the old one disintegrates — typically because it is only bouncing between walls and objects, instead of passing through a portal regularly. When a pellet launcher’s pellet has been received, the pellet launcher will no longer create pellets (with a slight exception when there are multiple pellet launchers in the same chamber). 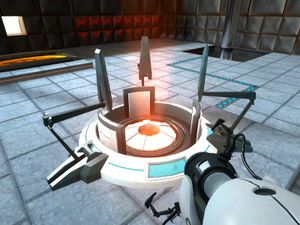 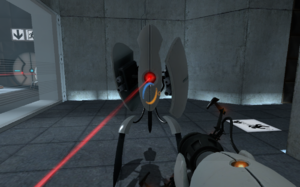 Turrets are robots simply designed to shoot bullets at any person within their range of vision. If Chell is shot numerous times in a brief period of time, she will “die” and respawn at an earlier location, although there are not a numbered amount of lives to run out of. They are easily shut down by knocking them over in any way possible, although they will shoot whichever direction they are facing for a few seconds before shutting off.