Professor Layton and the Curious Village/Chapter 5: The Hunt Begins 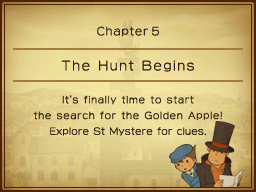 Chapter Goal: It's finally time to start the search for the Golden Apple! Explore St. Mystere for clues.

With the start of Chapter 5 comes the Journal Entry

Matthew suggests talking to Ingrid for more clues, for she used to be Flora's nurse. Unfortunately, Dahlia interrupts before Matthew can impart any additional information. The Journal Entry

"The Nanny" appears after the conversation.

Head back to Manor Road.

Ingrid is pleased to tell you all about the Baron's love for his daughter and late wife. She tells you that Lady Violet was buried in the garden. Layton decided to visit Violet's grave to see if it holds any clues. 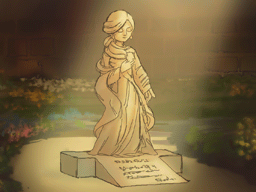 Matthew paces on the other side of the river. Talk to him and he'll be happy to assist in your visit of Lady Violet's Grave.

The grave is beautiful due to Matthew's vigilance. It doesn't hold any immediate clues, but Matthew tells you about the late Baron's Journal which may prove more helpful. The Journal Entry

To check out the Baron's Journal, head into the manor, up the stairs, and into Dahlia's room.

There are some books on Lady Dahlia's desk. Tap on them and Professor Layton will find the Baron's Journal. The Baron talks about an "it" that Flora dislikes. He also says that he's left everything in Bruno's care, and that he's left the location of a secret place with an old friend. The next step becomes clear; you must find the Baron's old friend.

Make your way outside.

Ingrid is conveniently standing just outside the manor. Talk to her about the Baron's old friend. She suggests you talk to Zappone. The Journal Entry

Before visiting the Fork in the Road, however, there are some puzzles to find around town.

Head to the Plaza and into Town Hall.

Hint Coins In:
#The Desk by the Door

Talk to Rodney and he'll present Puzzle 064 for you to solve.

When you're finished, head outside, then south to the Drawbridge.

Hint Coins In:
#The Path in Front of the Laytonmobile

Grab the Hint Coin, then head over to Park Road.

Hint Coins In:
#The Stone Wall

Talk to Pauly to trigger Puzzle 076.

Adrea also has a puzzle for you. Solve Puzzle 077 for Adrea and she'll give you a

Houseplant! Give it to

Next, enter the Restaurant.

Flick and Crouton are holding a plethora of puzzles for you. Talk to Crouton twice to solve Puzzles 078 and Puzzle 079. Correct answers will reward you with a

Flower Bouquet and a

painting scrap respectively. Give the Flower Bouquet to

Flick has four puzzles stored up to share with you! Solve the first puzzle, Puzzle 080 to get a

Stuffed Chair. Give this to

Layton. Talking to Flick again will trigger Puzzle 081. Solving this puzzle gets you a

Flick has a third puzzle for you, Puzzle 082. A correct answer will reward you with a

Layton will enjoy. Talk to Flick one last time to attempt Puzzle 083. Solve it successfully to receive another

Once you've acquired all your bounty, head outside and then north to the Park Gate.

Hint Coins In:
#The Middle of the Left Wall

Find the hidden Hint Coin, then move back to the Plaza, and into the Clock Tower.

Tap on the Cat and Mouse and Luke will try to fool Layton with Puzzle 065.

Talk to Lucy twice to trigger Puzzles 066 and Puzzles 067.

Head north to the Fork in the Road.

Hint Coins In:
#The Trashcan on the Right

Talk to Zappone. Unfortunately, he's pretty useless when it comes to acquiring information. In fact, the Journal Entry that appears after your conversation is called

Hint Coins In:
#The Roof of the Leftmost House

Talk to Gerard. At first he seems too tired to talk, but if you talk to him a second time, he'll ask you to solve Puzzle 068.

Look on the ground next to Gerard. See that sparkling object? Tap on it to read a journal entry by a mysterious person who made some sort of models for the baron.

Stop in at Prosciutto's before heading on.

Prosciutto has a puzzle for you. Solve Puzzle 069 and he will reward you with a

World Map! Give it to

Head outside, and then north to the Northern Hill.

Hint Coins In:
#A Brick Patch on the Leftmost Roof

Grab the Hint Coin, then go left to the Market.

Hint Coins In:
#The Blue and White Striped Umbrella

Upon reaching the Market, Giuseppe will hail you and hand over a vase he thinks is yours. The vase does not belong to you, however, so you hand it back. Giuseppe doesn't know who gave him the vase, but he does know a great puzzle. Solve Puzzle 070, then talk to Giuseppe again. He has a second puzzle for you! Solve Puzzle 071 and receive a

Flower Vase as a reward. Give the Vase to

There's a suspicious piece of crumpled paper at Giuseppe's feet. Tapping on it reveals an article about Inspector Chelmey. The article mentions that Chelmey likes sweets, but his display back at the manor suggests otherwise. Layton decides to investigate further, and adds "Inspector Chelmey" to his list of mysteries.

After looking at the newspaper, Archibald arrives at the market. Talk to him for a wonderful surprise. Archibald was Baron Reinhold's closest friend! He is happy to take you to his house so you can look around.

Hint Coins In:
#The Painting

"Chelmey in the Papers" appear. Before tapping on the Baron's old desk, tap on the upstairs bookcase. Puzzle 108 is hidden here!

Now tap on the desk. 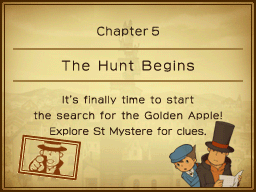 Hint Coins In:
#The Tray in the Back

Tap on the right drawer. In the drawer is a piece of paper with an X on it. It could be a clue!

Layton takes the paper, and Chapter 5 comes to an end. The Journal Entries

Archibald receives a call from Beatrice requesting your assistance. You will help her in a moment, but first, take a trip to the Market.

Talk to Agnes twice to attempt Puzzle 074 and Puzzle 075. Solving the first puzzle will give you only Picarats, but correctly solving the second puzzle will reward you with a

Globe! Give it to

Now head to the Inn.

Beatrice is extremely upset. It seems that her other tenant not only left his room smokey and dirty, but also skipped out on his bill! She doesn't know his name, but describes him as a man with a sharp mustache and a trench coat. Beatrice asks you to go find him so she can get her money.

Upon leaving the Inn, Chapter 6 begins.