Gorc and Pic are the deadly twins of the Force. You must defeat them and retrieve 8t88's head.

This battle is difficult, not because Gorc and Pic are tough, but because they fight as a duo. They must be defeated before the player can recover 8t88's head. 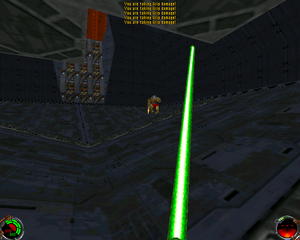 Gorc uses dark powers, which only include Throw and Grip. He frequently uses Throw to push the player away from him, but will only use Grip from a distance. He is relatively easy to defeat and is not weak to any particular attacks. 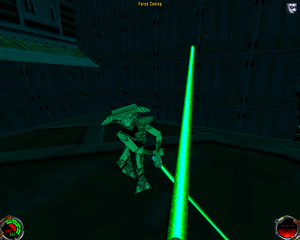 Pic uses Force Persuasion, which is the only power he knows. By this point in the game, the player will have had the opportunity to develop Force Sight, which will allow the player to see Pic while he is using Persuasion.

Pic is relatively weak to any type of attack. It is important to remember that Pic is small, so the player will need to look down while attacking or else the attacks will go clear over his head.