Yun is eager to engage his first battle with the Light side. A Jedi must come across many challenges. This is to be the first of many.

Mission Objective: Exercise the Force and defeat Yun. This is the test of a true Jedi.[edit]

Yun is the first of the Seven Dark Jedi that Kyle will encounter, and is fairly easy to defeat. As with shots fired, Kyle will block lightsaber attacks automatically. Yun is susceptible to the alternate attack.

Yun uses light powers; more specifically, he makes frequent use of Force Blinding and Persuasion. When he uses Blinding, simply look for his lightsaber blade. When he uses Persuasion, look for a series of sparkles. Note that while Yun is using Persuasion, it is impossible to block his attacks, so avoid him until it wears off. The table and chair in the middle of the ballroom can be destroyed for added fun. 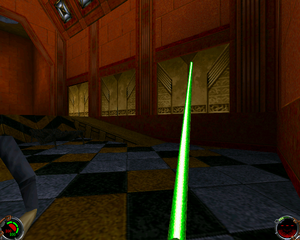 Open the two wall panels for shields and health packs if needed.