Recover your father's data disk from the clutches of 8t88's severed arm and find your way back to the rooftops of Nar Shaddaa, to meet Jan. 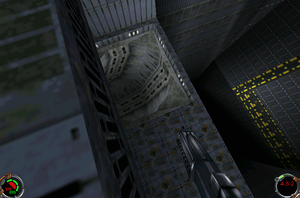 Make your way safely down from the landing pad to the rooftop. From there, drop off the edge and into the sewer. Grab 8t88's arm and the door will open.

Mission Objective: Work your way to the top of Nar Shaddaa.[edit] 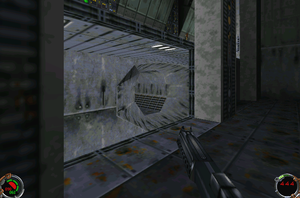 Either drop to the lower floor from the ledge on the left or take the ramp, then drop down into the next room and follow the corridor to the very end. Curve around to the right to come upon a ledge. Drop down and continue to the end of the hallway.

Secret Area 1/8: Stop about halfway down the hallway where there is a cut-away in the wall. Look down at the ground and inch forward to the edge; there will be a ledge below. Turn around and back off the ledge. Once you're in freefall, hold the forward key to stick your landing. 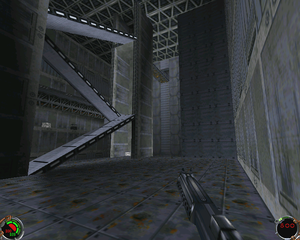 The hallway leads to a rooftop with a series of ramps leading up to a metal bridge. Go up the ramps and cross the bridge to the room beyond. Go up the ramp to the right and through the door. From this area, hang an immediate left and go down the slope to the far doorway. Meander through the short hallway to the cargo transportation area.

Ignore the first cutout in the rooftop, instead going to the left and across the rooftop to the far end. Locate the absolute farthest opening in the roof and drop onto the highest crate to avoid taking damage. Drop down to the floor. 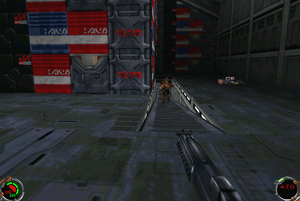 The underground ramps will provide access to the cargo transportation system, which will need to be activated to advance to the next part of the level. Use the underground ramp pictured for the most efficient route. About halfway through, there will be a ramp to the left that will lead up into a room. Go to the end of the room and turn right, then climb the cargo crates to the far end of the room and take the elevator to the floor above.

Drop onto the conveyor belt and jump to the ledge; hit the switch to start the conveyor system. Turn around and take the ramps down, then take the ramp at the other end of the room back into the underground passageways from before. Turn left and emerge up into the room, then repeat the entire navigation process to end up back on the ledge. This time, however, don't drop onto the conveyor belt itself. Step onto a passing crate and ride it to the end, up the lift, and all the way up. Jump to the ledge and go through the large door. 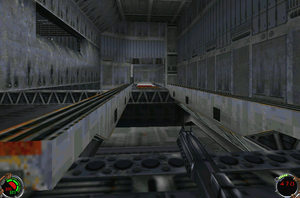 Jump up onto the crates and drop down, then go through the smaller door at the top of the stairs. Grab the red key and go back. Cross over the beams to the other side, then turn left. Hit the switch to move the beams to the other side, then use the red key to enter the control room. Hit the switch to open the large door across the way. Cross the beams again and follow the conveyor belt into the next room. Take the ramps to the top of the room.

Secret Area 2/8: Jump onto the crate from the first ramp, then to the far ledge. There's an armor vest and some energy cells in the cubbyhole. 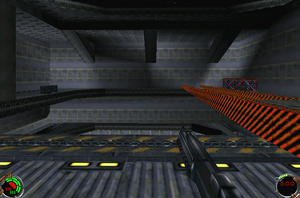 From the top floor, hang a right and drop down onto the conveyor belts. Wait for the cargo crates to pass by standing off to the side of the conveyor belts. Run against the belts to the end, then take the ramp to the top. When the next crate comes down, jump on top of it and run across to the next ledge. Run up ramps and across the tops of cargo crates until you reach the top. Cross through the room and out into another cargo transportation area.

Secret Area 3/8: In order to access this secret area, the forklifts need to remain in their original positions. Head out onto the right-hand arm of the forklift on this level, take a running leap, and jump off the end and land on the ledge below (saving before attempting this feat is highly recommended). From the ledge, run across to the far forklift and use its left arm to reach the secret area. 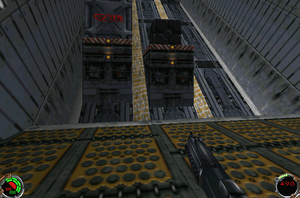 Jump over the crate and onto the lift.

Go left and through the door to a storage area. Jump down to the floor and follow the deactivated conveyor system to the end.

Secret Area 4/8: Jump across from the ledge to the tops of the crates to the left. Alternatively, drop to the floor and immediately turn left to find an a place to climb them. Leap across the gap to the other side.

Drop off of the conveyor belt to the floor to the left. Wait for the lift to come down and ride it to the top.

Secret Area 5/8: While the lift is going either up or down, carefully step off and onto the narrow ledge. Follow it and step up onto the wider ledge.

Secret Area 6/8: From the top of the first lift, jump onto the coveyor belt and across to the next lift. Ride it up to the ledge and jump off. The secret area will trigger on the further of the two ledges.

Secret Area 7/8: Backtrack to the previous ledge, then look down and wait for a cargo crate to pass underneath. Land on it, turn around, and jump up into the room.

Ride the second lift back up to the top and continue through the room. Head left up the ramp and cross the bridge at the far end of the roof. 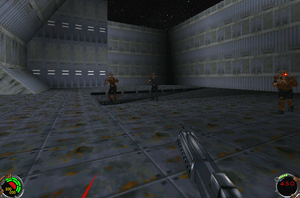 Secret Area 8/8: At the top of the ramp, turn around and carefully go along the top of the wall to the end, then jump across into the cubbyhole. The Super Shield from here will give you a bit of an edge in the next area.

Emerge onto the next rooftop and clear out all the Gran to end the level.