Maw has survived his unfortunate battle with Rahn and hungers for blood. Destroy him or perish. 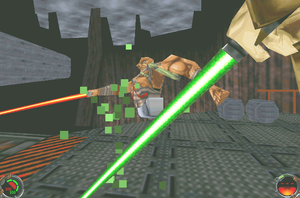 Maw is fairly simple to defeat. He occasionally uses Force Throw but it is woefully inaccurate. During battle, he consistently uses a spin attack. Also, the fact that he floats can make it difficult to block his attacks, but this can be done most easily by slightly backing up as he's swinging to ensure that Kyle blocks.

The battle area is quite large in comparison to the others, and Maw’s actual defeat requires attacking him until he retreats, and then chasing him down. He is first encountered outside the cargo lift, again in the small station, and finally on the landing pad.

The landing pad contains some power-ups for both health and Force energy.