The King of Fighters Orochi Collection/Athena

Athena Asamiya (麻宮 アテナ) is a character originally from SNK's video games Athena (as the Princess/Goddess Athena) and Psycho Soldier (as the young school girl Athena). The latter is a descendant of the Princess Athena and is also the version that appears in most fighting games. Athena possesses psycho powers that are a legacy from her ancestor Princess Athena through her mother.

She is one of the few fighters that has appeared in ever King of Fighters game so far, though she changes her outfit with almost every iteration. 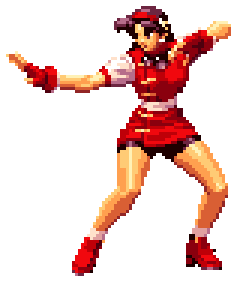 Athena is a modern day high school girl in Japan. She started her experience of Psycho Soldier as one day, while returning home from school, Athena saw a couple of Chinese fellows about to defend themselves from a local tough guy, whom she immediately knocked out with her powers before he threw a single punch. After introducing herself to the travelers, she discovered that the teenage boy, Sie Kensou, likewise had psychic powers while the aged man, Chin Gentsai, was a venerable master of many Chinese martial arts. Recognizing a good thing, they joined forces to become the Psycho Soldiers. Since then, Kensou has persisted in trying to make Athena his girlfriend, though she thinks of him as a good friend and nothing more (as of yet). By KOF '95, Athena met Kyo, and became mildly attracted to him after their match. However, she respects the fact that he already has a girlfriend and dropped the crush.

While Chin trained Athena and Kensou in kung-fu, Athena led their efforts in crime fighting and conquering the world of team combat in the annual The King of Fighters tournament.

By KOF '96, Athena had become just as big a sensation in the fighting world as she was on the pop scene for her charm, unique style, and amazing powers. Though she had never led her team to an overall championship win, she and her powers--along with those of other major heroes in KOF — played a crucial supporting role in helping Kyo Kusanagi, Iori Yagami, and Chizuru Kagura defeat at various times Rugal Bernstein, Geese Howard, Goenitz, and Orochi.

In KOF '97, Athena was forbidden to take part in the KOF tournament by her master Chin. After presenting him a letter from a fan, Kaoru Watabe, a crippled girl who took inspiration to learn to walk again by watching Athena's determination in the tournament, master Chin had no choice but to join the tournament once again along with Athena and Kensou.