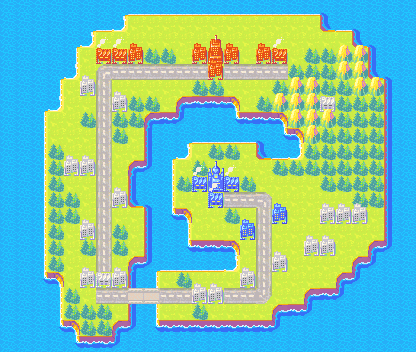 As a relatively open and large map, you can take different approaches to conquering it. This guide is primarily focused on rushing down the left side and around the bottom. The heavily forested region on the right will be merely a defensive position, with a late game rush.

A good CO choice here is Jess, the gallant tank driving lass from Green Earth. The reason to select her for this map is quite simple: vehicular units work great here, and Jess's CO power and SCOP resupply, increased movement range, and boost to offense and defense is beneficial. Because the bottom most factory is quite a distance from Koal's HQ/factories, the extra movement here gives a great advantage.

If you are using skills, try something like the following setup:

Overall, a well balanced offensive setup, with additional bonuses on roads to counter Koal's own bonus.

The key things to achieve:

The key point for an early advantage is to quickly reach the bottom of the left side, and capture that lone factory. With that in mind, start off on day 1 with all infantry (don't forget the right most factory too!) and then the next consecutive turns, build one APC + infantry at the leftmost factories. With 2 APCs, you can shuttle infantry down the left side quickly and reach that factory before Koal can even get near. Build 1 tank immediately after the 2 turns of APCs. As for the right side, capture the factory among the forests, then still up a defensive position with 1-2 artillery (no rush to do this however) and a couple infantry/mech. This is only the minor front however, so don't focus your efforts here.

As for the left side, most likely when you are capturing the factory, Koal will have a recon unit nearby. As long as you sent your tank down, you need not worry about your lack of firepower, yet. Station your APCs strategically to make sure your infantry can secure that factory. Meanwhile, the other infantry can slowly capture the remaining cities.

After several turns you should be near the bottom bridge, and ready to start focusing on offense. Ideally, you'll want a small force consisting of 1 artillery, 1 rocket, ~2 tanks, 1 midtank/neotank. This should be doable if you have managed your funds and captured cities at an efficient pace. Koal loves his midtanks/neotanks as well, so mostly likely he'll have one or two by the time you are building your own. Be patient here, and approach slowly, picking off Koal's units, but making sure you are not in range of his midtanks.

As for the right side, Koal probably will be rushing with infantry, but as long as you have your artillery stationed there, with 2-3 infantry/mech, you should be fine. If he does send a tank at your tank, the heavily forested region will severely hinder its movement range. He will not rush if your artillery is positioned well.

When you have captured the two cities just beyond the bridge, you can start pushing ahead. Toss out your APC/infantry units as bait and use them to shield your midtanks/tanks. Position your artillery and rockets accordingly so that his midtanks/neotanks that attack will be in their firing range. Focus on taking out his midtanks and neotanks first, while using your regular tanks to push ahead.

Most likely Koal's SCOP and your SCOP should coincide at similar timing, so prepare ahead if you are anticipating an offensive counter-attack. Koal's SCOP increases the movement of all his units, so plan ahead and don't leave any gaps in your formations. If you happen to get your SCOP beforehand (which is possible with Star Power), quickly attack all his heavier units. This leaves his counter-attack heavily weakened.

Once the battle is at Koal's doorstep, you can start infantry rushing the right side forested region and start capturing the cities there. At this point, the tide of battle should definitely be in your hands, so its simply cleaning up here.

Estimated time of completion should be around 16-18 days. A S-rank should be easily achieved as well.