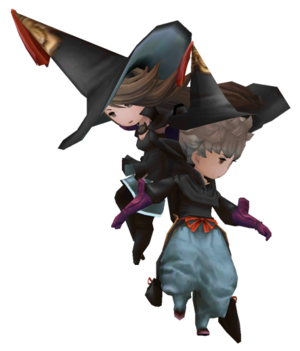 Black Mages are the first offensive magic users you can get in the game. Their affinity with Black Magic lets them learn a variety of damaging spells and debilitating status ailments. Early on, the Black Mage's ability to target an opposing enemy's elemental weakness is very helpful, while status ailments are equally useful any time in the game. The cost to this is that Black Mage has the standard mage stat spread: powerful magic but weak defenses. Black Mages are valued more for their skill kit than their stats, and can be rendered obsolete by stronger mages later on. In spite of that, Black Mages remain a key part of any team, and both Black Magic and its various support abilities will still find uses at any stage of the game.

Black Mages can use any other magic or MP-heavy job commands well due to their innately high MP. The reverse is also true, as Black Magic is a strong job command for other offensive and supportive jobs. Most notably, Arcanists will effectively run Black Magic permanently as their spells depend on the Black Mage's status ailments, while they provide support abilities that can reduce Black Magic MP or amplify its strength. Besides all that, Silence Immunity, Pierce Magic Defense and Group-Cast All are excellent support moves for any magic user.