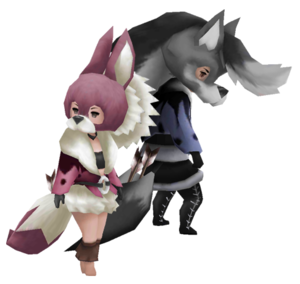 Rangers are strong physical attackers that specialize at targeting family weaknesses. Their high aptitude in Bows is rare among other jobs, which is certainly a plus since Bows are some of the strongest weapon types in the game. The Ranger's skillset is rather boring, as most of it consists of various "slayer" abilities that target enemy weaknesses. However, these skills synergize very well with the Bow, as it lets Rangers effortlessly prepare Bow specials. Rangers also make great secondary jobs, given their range of slayer attacks that target enemy weaknesses. Precision and Hawkeye are also fairly desirable support commands for other physical classes as well. It's just a pity that the Hunting job command lacks a Human slayer, as a large chunk of enemies including bosses are humanoid.

Hawkeye raises the accuracy of Rangers by 100%. The impact of this ability isn't too big since Bows and Daggers have higher than average AIM. It does work well with Precision to increase your damage output, and doesn't take up a support command slot to do so.