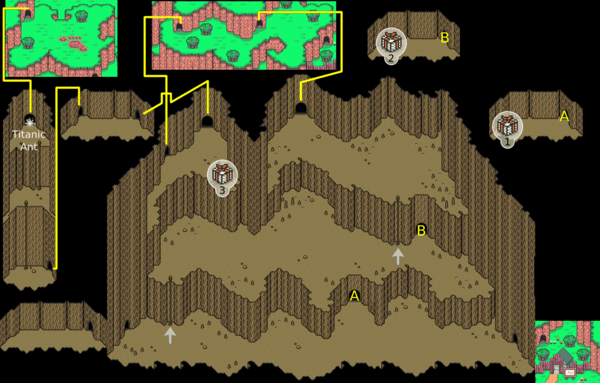 the area you cover in Giant Step. Presents and other items are in a circle with numbers referring to the items found section below. Yellow letters and lines link corresponding doors.

Disappearing Enemies
If you find yourself about to run into a group of difficult enemies that you'd die battling, there is an easy way to change that. Simply walk back and fourth through the door you came from to reset the room you're entering. Repeat doing this until an easier set of enemies (or sometimes no enemies at all!) appear. This is especially useful in tight situations when you're low on HP and hamburgers, so use this to your advantage!

There are three types of enemies inside of this cave and they can be fairly difficult. The easiest enemy you fight will be the attack slug. They always attack in groups, but are very weak. Just take them out one at a time and you'll be fine. You may also fight Black Antoids. Be very careful of these as they can pack quite a punch. They also tend to come in groups and can deal up to 13 points of damage every attack. Take them out quickly. Be careful not to confuse the Antoids for Attack Slugs when walking around. Both enemies look like little dots on the ground. The final type of enemy is the Rowdy Mouse. This enemy has a tendency to SMAAAAASH often for 13 damage, so be extremely careful.

When you enter the cave you'll notice a tunnel to north. Enter it for a Skip Sandwich. Head back the way you came and keep going left. The tunnel to the left on the bottom floor leads to a dead end, so just climb the rope to the next level. Head to the right and enter the next tunnel entrance for a Cold Remedy. Once back out into the main cave area, take the rope up and enter the tunnel entrance on the top level. This will take you outside of the cave.

The Butterfly of Giant Step
There is a butterfly flying around in the outside area of Giant Step that will restore 20PP to Ness when he touches it (particularly seen in the exit above cave B.) By entering the cave and exiting back to the outside (as described in the above tip,) you'll find that the butterfly reappears. Make use of this to to heal Ness with PSI Lifeup α and restoring his PP with the butterfly until his HP is full. Don't forget to refill your PP before you leave!

Enter the cave from the next entrance and you'll find a Hamburger. Continue along the path, climbing two more ropes and you'll encounter your first "Your Sanctuary" boss, Titanic Ant.

Boss Battle: Titanic Ant
Offense: 19, Defense: 23 Speed: 6, Guts: 9
HP: 235, PP: 102
Immediately start off this battle with PSI Special α until you no longer have enough PP. Titanic Ant will use PSI Magnet to steal your PP so you want to use the ability as much as possible. At this point the two Black Antoids accompanying the boss will be destroyed (if not take them out quickly because they can restore Titanic Ant's life). Now just keep bashing Titanic Ant and restoring your HP with Hamburgers until he is destroyed. Make sure you HP does not drop below 50 or his biting attack can kill you.
Exp: 685, Money: $150, Item: Nothing

After you defeat Titanic Ant, you can exit the cave to find the first "Your Sanctuary" location. The melody will play and your Sound Stone will record it automatically.

You must now head back to Onett, but it might be a good idea to stop and train some more. You'll notice that the enemies all run away from you now. Use this to your advantage by attacking from behind to gain the upper-hand. This is an effective way to gain a level and a decent amount of money before heading on.