The Warriors of Light obtained the keys to Eureka and Syrcus Tower from Doga and Unei, but the Earth Crystal is still missing. With the keys in hand, the heroes decide to head to the Crystal Tower, which holds powerful weapons, powerful enemies, and perhaps even more secrets...

The Statues and the Fangs[edit]

Airship jumble
You'll need the Invincible for this part, so go back and exchange it for the Nautilus if you haven't already.

Just west of the Cave of Shadows are four sets of statues. You may have already crumbled a few statues if you've tried to walk through here before, but the last set refused to budge. Now that you have all the Fangs, you're allowed to pass... just not while in your airship.

The statues crumble, two by two, as you walk through them, until there are none left. Get back in your airship, hop the tiny mountain to the west, and fly through a large open area before coming to a huge tower, surrounded by a wall.

Welcome to the Crystal Tower! ...or the maze that guards it anyway. Make sure you heal up and save before entering. Keep your jobs the same as the last area for now.

Enter the Ancient's Maze, then go through the door to the north. You'll see the Earth Crystal! But, wait, didn't Goldor destroy it? Before you can think too much about it, you are attacked! 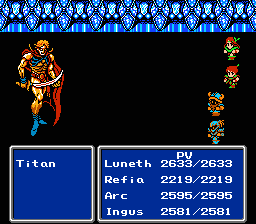 Guarding the Earth Crystal is Titan, a powerful creature who hits hard physically and can also wipe out most of the party's HP with Quake. Use your team of physical attackers and one healer to get through the fight. If you're having trouble, try taking all Dragoons and one White Mage to heal.

After you defeat Titan, he thanks you for freeing him from Xande's control, and blesses you with the power of the Earth Crystal. That means new jobs for everyone!

Exit the maze and heal up inside the Invincible if needed.

After you're all rested, change to some of the new jobs if you wish (they are quite strong) and head back inside the Ancient's Maze for round two.

The text instructions below only apply to the 3D versions of the game. Refer to the map in this section for the NES version.

On the second level, immediately go west for two chests with Crystal Shield and Lilith's Kiss. Return to the east and follow the path around to the west, then pick up Crystal Mail from the chest to the south. Go north, picking up White Musk from the chest on the way. Follow the path to the east, open a chest for Crystal Gloves, then go through the passage in the wall to the east.

On the third level, go east and grab the chest with the Crystal Helm, then go south. All the way to the south are three chests with Break Blade, Phoenix Down and Chocobo's Wrath. Head back to the north and open the chest with Dual Haken to the northwest before going through the passage in the wall to the east.

Wind around the path on the fourth floor, grabbing a Phoenix Down and Protect Ring along the way. Take the stairs to the next floor.

On the fifth floor, head north until you see a chest. Grab the Holy Lance from it, then head around the path, either east or west, both paths converge at the northern part of the room. Be sure to go south once you're at the north end of the room to get the last chest, with Hellish Claws.