This section contains information on the main characters and characters that tag along with the party on certain occasions.

These characters are the main party throughout the game. 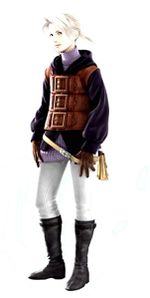 "An orphan raised by Nina and Elder Topapa in the village of Ur. Adventurous by nature, his curiosity gets the better of him as he tumbles into a hole created by the great earthquake..."

"Another orphan raised by Topapa, and Luneth's best friend. Unlike Luneth, he prefers reading over gamboling in the wild. His studies endow him with great knowledge that more than makes up for his shyness." 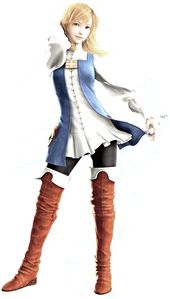 "Raised in Kazus by the mythril smith Takka, whose rigorous training led her to run away from home... again."

"A loyal soldier of King Sasune's army, he narrowly escaped the Djinn's curse. His prime concern is finding the missing Princess Sara." 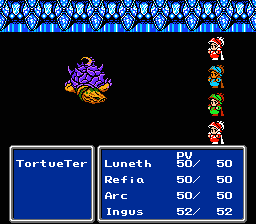 In the original Famicom (Japanese NES) version, the characters had no default names nor backstories. Still, their color scheme corresponds to the the one in the remakes, so they can be named accordingly.

These party members will join the party for short periods of time. During their time with you, you can converse with them, and they will help you out randomly in battle (but only in the remakes, not in the NES version).

The daughter of King Sasune. She goes to the Sealed Cave with a mythril ring to try to defeat the Djinn.

The inventor who created the Enterprise. He joins your party so that he can finally get back to Canaan, his hometown.

An amnesiatic traveler who left his girlfriend behind. He joins the party after a close encounter with a legendary monster.

A girl who joins the party to restore light to the Crystal of Water.

A prince who was kicked out of the castle of Saronia by his father. He wishes to get to the bottom of his father's strange behavior.

A master wizard who assists the party in gaining access to Eureka.

The master of the world of dream. The party must wake her with Noah's Lute in Unei's Shrine.

This boss will follow you as a shadow after his first defeat and will steal the Ice Horns to get access to Fire Crystal Cave. He will never help you in battle, but you can try talking him on NES version, but he just say ¨? ? ?¨