After restoring the Fire Crystal's light, a plea for help arrives from the Tokkul. The bandits from the flying fortress raided the town and captured all of the people!

Suggested team for this chapter:

Return the horns to the Dwarf near the shrine. The dwarves will thank you for your help by granting you access to their treasure room. Talk to the Dwarf leader again to get a Magic Key, then head to the southeast. Speak to the Dwarf just before the stairs then head down. Follow the path to the treasure room. In here, you'll find full equipment for the Scholar and Knight, a bow for the Ranger, and many other useful items. Important, before you head on your way out, load up on holy arrows for next chapter. On your way out a man approaches you, and asks you to go help Tokkul. However, there's still loot to be plundered, so head back to Castle Argus.

Once you get to the castle, go inside, up the stairs and interact with the farthest candle to the east. A secret passage opens. Go through the passage, then pass through a hidden wall in the east. Grab the three chests for a total of 3000 Gil, then head upstairs and grab all six of the chests there for 4700 Gil. Go upstairs again.

You'll find yourself on the castle's rampart. Head west to a locked door, open it using your Thief or a Magic Key and head inside. Investigate the dresser to the east to open another secret door, and grab the three chests (Light Arrow, Killer Bow, and 20x Medusa Arrow). Exit the room, then head east to another locked room. Take the loot from the six chests here: Book of Light, Book of Fire, Book of Ice, 20 Ice Arrow, 20 Fire Arrow and Scholar Robe.

Once you've grabbed everything, leave the castle and head to the Living Woods.

In the Living Woods you will meet some Fairies and notice a huge crater in the middle. If you talk to the Fairies they will tell you a bit about the Wizard Hein, (namely his weakness!) and the crater. Once you're done chatting with the Fairies, head out and follow the coast south to Tokkul.

Complete the Bestiary
You cannot come back to this place after defeating the boss. Make sure you've encounter every mobs before facing Hein. There are 5 kinds of mob in this dungeon, the missable ones are Lamia and Dullahan, both can be found in the third chest room in Second floor.

Most enemies are undead, so are weak to Holy and Fire. You can use the Scholar's Study ability to confirm their weakness. Equip the Ranger with the Holy Arrows and shoot at will, since this dungeon is the last one in the game with a large number of undead enemies. The Knight and the Scholar should equip Fire weapons: the Salamand sword and two Books of Fire, respectively. Switch to any other arrows and sword when fighting against enemies that are not undead, using the Item menu during battle. The Thief should always try to Steal instead of attack; in particular, steal arrows from the Demons and attack items from the Lamias. 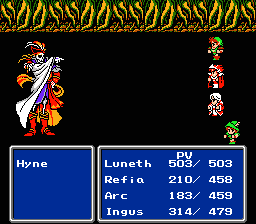 Hein is able to change his weakness after using the spell Barrier Shift. After you notice Hein use this spell, have the Scholar Study him to discern his new weakness. Then, open the Item menu and change the weapons of the Scholar, Knight and Ranger to match Hein's weakness. The Thief has no elemental weapons and cannot steal much from the boss. Instead, have your Thief use offensive items he stole during the various battles, such as Arctic Wind and Zeus's Wrath. If you found or stole a Bomb Arm in the Molten Cave, use it while Hein is weak to Fire to deal massive damage.

DS-specific notes: This fight can be tough since your Scholar, who probably has all of your healing spells, is tied up Studying Hein's ever-changing weakness. It may be easier to simply ignore Hein's Barrier Shift and continue attacking with your strongest elemental weapons, while your Scholar heals with items or spells. You could also swap out your Ranger for a Monk and use the Retaliate ability to return damage to Hein.