Two separate lists are necessary for the Famicom and the DS version of the game, because in the DS remake all the tabulated characteristics of the weapons were modified.

The NES version included less weapons than the DS remake. Their location is often different, and sometimes even the jobs can use them are not the same.

Default sorting is by game progression. Selling price is half of purchase price. For weapons that can only be found but not bought, the price column reports twice the selling price.

The Other jobs column does not report the Ninja (FC/NES) and the Onion Knight (DS) because these class can equip any weapon.

In the following sections, the name of weapons introduced in the DS version are highlighted in green.

These are the basic weapons, with low attack values and no special effects. The notable exception is the Onion Sword, the strongest weapon in the game. The weapons in this section are not rewritten in other tables. Default sorting here is by weapon type, then price.

This is a list of the weapons found before restoring the Wind Crystal. They can be used by the Freelancers.

See also #Devout's staves and #Magus' rods; in the DS remake, the Red Mage can also equip some #Knight's swords and #Thief's knives. 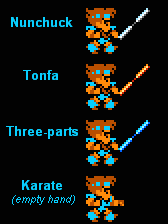 Nunchakus were replaced by knuckles in the DS remake. 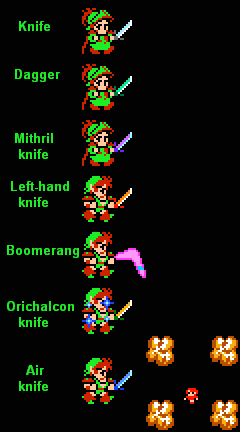 In the Famicom original there was one boomerang only; two more are added in the DS remake.

Boomerangs allow the wielder to stay in the back row, thus there is one advantage and one disadvantage for the Thief: defense is doubled, but Stealing success rate is lowered. Furthermore, in the DS remake boomerangs deal less damage than corresponding knives. 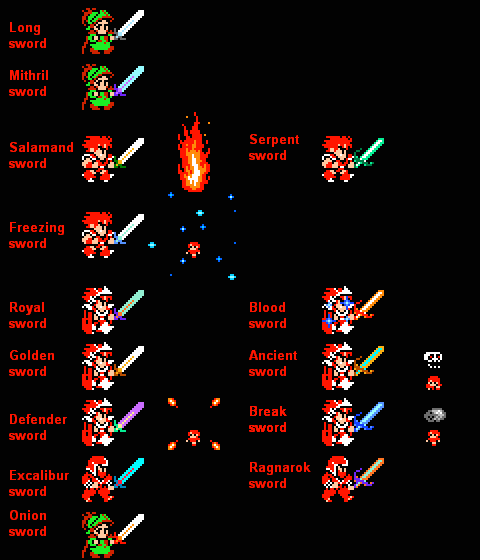 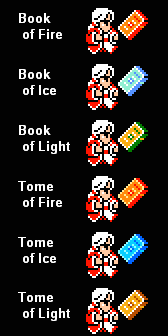 The Ranger must equip one bow and one arrowsset in order to use them. Bows and arrows are long-ranged.

Holy arrows: although these arrows are very rare, there are just three dungeons with undead enemies, i.e. enemies weak against this element. Such dungeons are the Cave of the Seal (chapter 2), Hein castle (chapter 7) and the Ancient Ruins (chapter 12). There's also a trapped chest in the Sunken Cave (chapter 11) guarded by a zombie dragon.

Medusa arrows: another very rare type of arrows. They can instantly petrify most enemies, therefore they are really deadly arrows. They can come in handy in chapter 12, both against the splitting enemies and also in the two optional dungeons. Unfortunately, they are not effective if the Ranger is miniaturized. 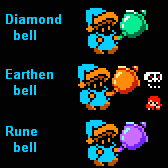 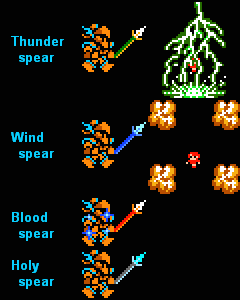 The first four spears are found in Saronia, where you need a team of four Dragoons to defeat Garuda. After that, the Dragoon and the Viking are quite interchangeable and their weapons are found in the same dungeons.

The Holy Spear is effective against undead enemies, but it less useful than it seems. In fact, there is only one undead enemy in the dungeons after it is found. 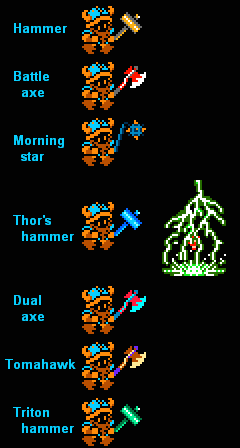 In the DS remake, the Warrior too can equip axes, unlike in the Famicom version. The Morning star is the only Famicom weapon that is missing from the DS remake. 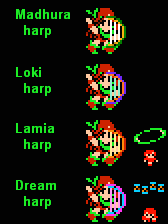 In the NES version, the Dream harp can only be obtained through the item upgrade glitch.

The NES Lamia harp can be useful to remove status ailments from allies without hurting them or to remove positive statuses from the enemies. If it is carried in the item menu, you can equip or unequip it during battles. 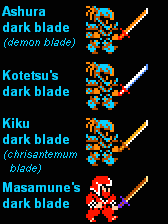 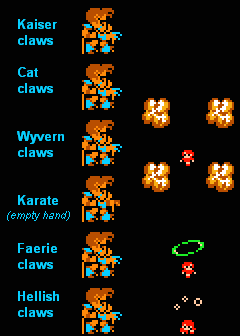 In order to attack enemies, a Devout should rather use his staff to cast spells from the Item menu, instead of using the Attack command.

Most staves can be equipped by the White Mage, the Red Mage and the Sage. 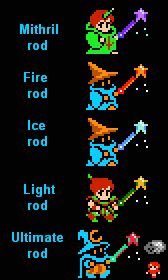 The Magus should rely on his Black Magic spells to attack enemies, not to mention the fact that he should stay in the back row. Therefore, the most prominent attribute of the rods is their elemental defense bonus; unfortunately such bonus is glitched in the NES/FC version, i.e. it does not work.

Most rods can also be equipped by the Black Mage, the Red Mage, the Evoker, the Summoner and the Sage. 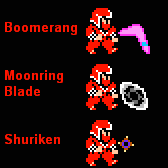 In the NES/FC version, the Ninja can equip every weapon (except the Onion Sword), plus the Shurikens. Anyway, he can only equip up to two weapons at the same time. In the "Item" inventory, keep some useful weapons for the Ninja; for example, check the list below.

In the DS remake, the Ninja can equip a limited selection of weapons. See: #Thief's knives and boomerangs, #Mystic/Dark Knight's darkblades

Notable weapons for the Ninja:

The Onion Knight can actually equip every weapon in the game, plus the two exclusive swords listed here.