Obeying the last words of Desh, you travel to the island of the Dwarves looking for clues about the Fire Crystal.

Before going on to Dwarven Hollows, let's do some sightseeing and get loot! First, visit the idyllic farm town of Gysahl. To get there go north through where the whirlpool was blocking the way, then head east. Follow the coast around until you see a village to the east on a little peninsula.

In the remote village of Gysahl, life goes on peacefully.

Items in italics may not need to be purchased because they can be found for free.

Shuriken
The Shuriken sells for a whopping 30,000 Gil. You may be tempted to sell it right away, but be sure to hold onto it for later. Once you get the Ninja job and can use "Throw", the Shuriken hits with 200 power which is notably more powerful than the strongest equippable weapon in the game!

In the southeastern part of the village there is a small peninsula with three hidden treasures (two Magic Keys and Gysahl Greens). Head to the magic shop and grab any spells you may need. From the magic shop, go east to the bridge then cross the bridge heading north. Enter the Chocobo stables there. In the back of the stables search the two pots for two Gysahl Greens. From the stables go north, across a bridge to a shop which sells Magic Keys. Walk through a secret passage in the eastern wall and grab the Shuriken from the chest. Head over to the inn after you've cleaned out the loot.

Once you get to the inn, go inside and head east through a secret door just below the stairs. Speak with the old man here to check out your Achievements and Bestiary. In the NES version, the man asked you to write mail with feedback to Square Soft. After talking with the old man, head back towards the Tower of Owen, and continue west to the Dwarven Hollows!

Items in italicsneed not be purchased because they can be found for free.

Item Storage
If you go to the Chocobo woods just south of the Dwarven Hollows or north of Gulgan Gulch and use a Gysahl Greens, it will summon a Fat Chocobo that can store your items for you. This is great if you are running out of inventory space and don't want to sell anything.

The place you are looking for is an island with two caves. Land on the south side of the island, and enter the southern cave, which is Gulgan Gulch. Head down the stairs into a room with a large altar in the middle. There are shops in the room to the north, so stock up on Potions or anything else you might need. If you have the money, buy Ice Armor and Ice Helms for party members who can equip heavier armor. Rest up at the Inn. When you're ready to progress, return to the main room.

In the south of the room, there is a dwarf standing near a shrine that you can't enter. Speak to him to learn about Gutsco. You discover that the rogue Gutsco has stolen a Horn of Ice, preventing the Dwarves from accessing the Molten Cave where the Fire Crystal is located. Gutsco fled to the Underground Lake, but Dwarves can't swim, so it's up to you to go track him down. Take the stairs in the southwest corner of the main room, cast Toad on your party and dive in!

Un-Toad yourself and head south over a bridge, then east over another bridge. Grab the chest to the north with a Gold Needle, then continue east to the next area.

Head northeast, then south to take the stairs to the next area.

Go south over a bridge and west for another chest which holds Zeus's Wrath. Continue south over the bridge, then west, grabbing the items from the two chests: Zeus's Wrath and Gold Needle. Continue north over another bridge. Open the chest, which contains a Gold Needle, and head east to the next level.

Prepare for a boss fight and follow the path onward, grabbing 3000 Gil from both chests on your way. 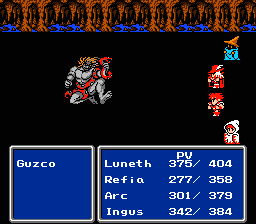 Gutsco has no weakness, but is easier than Medusa. He can heal himself for about 100 HP a turn, and occasionally casts Mini. Have your White mage or Red mage un-Mini party members as needed. Blast away at him with your high level spells, and keep your health up. Save any Antarctic Winds you may have for the next boss fight.

After the battle, you will receive a Horn of Ice, and notice a strange shadow following your party. Return to the Dwarf by the shrine in Dwarven Hollows. He will dispel the barrier to the shrine, and ask you to place the Horn of Ice back on the altar. Do so, and the shadow that followed you here will reveal itself as Gutsco! He will steal both horns and escape.

Follow Gutsco to the Molten Cave, north of Dwarven Hollows.

Since the monsters and boss here are mainly fire element, equip the Ice Armor and Ice Helm that you purchased in the Dwarven Hollows. Equip your mages with Ice spells, or at least the Ice Staff as well. In this guide, floors are numbered according to the map in this section.

If you tried to come here before facing off against Gustco in the Underground Lake, a wall of fire blocked your path. Upon entering the Molten Cave now, you'll notice the fire barrier is gone, due to Gutsco's invasion. Follow the path and at the first crossroads head west to a chest with an Antarctic Wind. Return to the crossroads and walk south through the lava. The lava damages your party every second, but have no choice but to trudge through it. Keep an eye on your party's HP after walking through lava and heal up as necessary. Continue south to another crossroads, and go east for another Antarctic Wind. Return to the crossroads, then go west to B2.

Follow the path on B3 all the way west for Impact Claws, then head north for a Phoenix Down. This area looks like a dead end, but check the rock to reveal a secret passage. Go in and head upstairs to the Fire Crystal room, and prepare for battle! 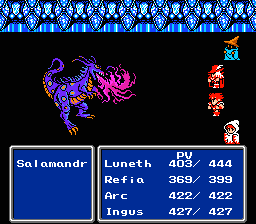 Salamander is the first boss with a weakness! That means there are several things you can do to make this fight go more smoothly:

Salamander can hit pretty hard, especially on your lightly-armored Mage allies. He also can use Flame Breath, which deals heavy damage to your whole party. Keep your party's HP up, and keep attacking with Ice attacks to win the fight.

After your victory over Salamander, you will get both the horns back and unlock the Fire Crystal jobs! After your chat with the crystal, hop on the teleporter behind it. Return to the Dwarven Hollows to restock your items and heal your party.

In the NES version, the Fire Crystal grants the Thief job instead of the Geomancer. The Geomancer job is obtained from the Water crystal instead.