Enterprise Controls
Unlike in previous Final Fantasy entries, your sailing vessel doubles as an airship. Enter your ship and press B (Cross on the PSP version) to pull in the sails, let out the propellers, and take to the skies! While in the airship, you can fly over water and land, but not mountains. To land the airship, hover over water and press B again (Circle on the PSP version). Your first airship was able to land on solid ground, but the Enterprise prefers to stay seabound when you're not using it.

Return to Argus Castle, which finally has people in it again! Talk to King Argus to get the Wheel of Time. Take the Wheel of Time to Canaan and talk to Cid. He will turn the Enterprise into an airship. (If you revisit the west tower that was locked on the previous trip, you can pick up 2 Elixirs from a person inside)

Before you leave the Floating Continent, visit the Village of the Ancients and buy as many arrows you can for your Ranger. Also, make sure you have the Sight spell, and plenty of MP to use it. When you're ready, simply fly the airship off the continent and into the clouds.

Head to the small island in the northeast corner of the map, using Sight to stay on track. Go inside the ship wrecked on the shore of the island.

You will find two chests: one containing a Blood Sword and the other, Zeus' Wrath. Equip your new sword to the Knight. The Blood Sword's special ability turns damage dealt into HP, which is helpful for your Knight while Covering other party members. In the NES version, the Blood Sword is weaker than other swords, but its special ability makes it worthwhile to equip anyway.

Give the girl in the bed a Potion to heal her. You will find out she is the Priestess of Water, Aria. She will join your party to help you return the light to the Crystal of Water.

Head south to find a large island, where the Temple of Water is located. Inside the temple there are two magic springs: one to heal and one to revive. Have Aria grab the crystal shard, then head to the Cave of Tides, located outside, in the cave just behind the temple.

The enemies here are weak against Fire and Lightning, so be sure to equip Fire- or Lightning-aspected elemental weapons to your party. To save resources, don't heal a party member with critical HP; the Knight automatically Covers any allies in critical status. Armed with the Blood Sword in hand, the Knight is an unstoppable shield.

That said, you may want to take some time to level up your characters here. Return to the Temple of Water any time your health is low, and heal at the magic springs.

There are neither chests nor hidden items in this dungeon. However, in the 3D version, you can find a Blizzaga spell in a chest at the end of the path with the long staircase. 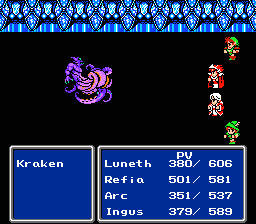 Kraken has no weaknesses in the NES version of the game. However, in the 3D versions, he is weak against lightning. Have your NES-Ranger/3D-Scholar use Zeus's Wrath and keep the party healed up while they dole out Lightning-element attacks. Exploiting Kraken's weakness will bring you victory in no time.