The Warriors of Light outfit their airship with a Mythril Ram and break the boulders blocking passage to Canaan. However, their airship is destroyed in the process. They arrive in the city of Canaan, but they are stuck with no means to continue on their quest. With nothing else to do, they agree to help a girl in distress, by looking for her beloved, who left town towards Dragons Peak...

Items in italics can be found for free, so there's no need to buy them.

Go back to Kazus where you'll find the curse has been lifted. (That means you can now buy stuff there!) After a short cutscene, Refia leaves your party for a very short while. Go to the Inn and speak to Cid, who wants to go back to Canaan. If you talk to him, he'll advise you that the blacksmith can install a mythril ram onto his airship to break through the boulder blocking the way to Canaan. You don't have to pick up the airship for this to happen. On the DS version, the airship will be brought back to Kazus automatically.

With Refia back in your party, enter the mines northeast of Takka's house. Just like the Sealed Cave and the Western Tower of Sasune Castle, the Mythril Mines are infested with Undead, so the strategies outlined in the previous section apply here. Purchasing a Fire spell could go a long way to contributing to your success as Undead monsters such as Shadows and Mummies are weak to Fire. In the Mines, follow the path north and check the northwest pillar to open a secret passage. Enter it and follow the path to two chests, each containing a Mythril Sword.

Before departing Kazus, consider buying a set of Mythril Armor, a Mythril Glove, and a Mythril Bracer. A second Bracer will be found later. A Mythril Rod could add a point to Intellect of any of your Black or Red Magi, potentially increasing their magic damage output.

Exit the mine and fly west to the large rock blocking the path between two mountains. Doing so will destroy both the rock and the airship, but you'll have access to Canaan on foot. Head south to the town at the foot of the mountain.

Cid will leave the party and tell you to meet King Argus in order to make a new airship. You can continue along the quest, but first, let's grab some loot!

Go to the house connected to the Inn and search the firewood beside the stove for a Mallet. Go left of the firewood through a hidden passage below the lamp and search the pot to find a Golden Needle. Talk to the girl on the bed, and Luneth and Refia will decide to search for her beloved Desch in the mountain just east of Canaan.

In the northeast part of the village is a pond; take the stairs in the north, and follow the river to the west until you find a chest containing an Elixir. You'll need this soon. Head to the armory and buy anything you may need, then head to Cid's house north of the armory. Enter and talk to both Cid and Mrs. Cid. Use the Elixir on Mrs. Cid, and Cid will tell you about a secret path in his house! You can always return later if, for some reason you lose the Elixir. Enemies in the Altar Cave may drop one if you're patient enough.

Activate the lamp just above the bed and head through the passage, and down the stairs. Grab the 8 chests (Phoenix Down, Blind, Golden Needle, 20 Iron Arrows, Great Bow, 2 Gnomish Breads and Potion). Walk down into the water and onto the small island in the southeast corner. Continue east, into the passageway and loot the chests (4000 Gil and 2 Phoenix Downs)

You should also purchase a Thunder spell but it's not immediately pertinent; you'll be doing some sailing later. Buy anything else you need, exit the village, and walk east to the mountain, Dragon's Peak.

Every enemy is weak against Wind, which means every enemy is weak against attacks from Bows and Arrows. Equip your Warrior with the Greatbow you found at Cid's house and Wooden Arrows (or Iron Arrows if you bought them in Canaan) and put them in the back row. If you have a Red Mage, they can use the Bow from Castle Sasune (or another Greatbow if you bought it) and Iron Arrows. Monks and Thieves will need to remain in the front row, though they run the highest risk of being petrified by enemy attacks. The Rukhs, Rust Birds, and Helldivers on the slopes of the Dragon's Peak have attacks that will inflict the Stone status, but that risk may be mitigated by being in the back row and/or equipping a shield.

Follow the path up the mountain to the crossroads. Take the southern trail for a chest containing a Phoenix Down, then continue up the mountain. When you come to another crossroads, take the path to the east to find Aero. Give the spell to a White or Red Mage, who can use it to exploit the weakness of the enemy birds. Use it only during a Back Attack. Return to the crossroads and take the path west. Grab the Gold Needle from the chest and then go up. Bahamut will show up and throw you into its nest. Once there, talk with Desch. Bahamut will fly in to roost and attack you on sight. 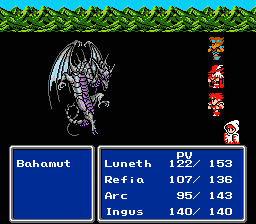 In pre-islamic Arab culture, the Bahamut is a huge, powerful and benevolent creature that supports the World on its back. Later, Christian influence turned it into a "pagan devil", Behemoth (other devils: Astaroth was the Babylonian goddess of love Ishtar; Beelzebub was the Phoenician god Baal-Zebub, i.e. "Baal the Almighty").

You are far too weak to defeat him, so just run away from battle.

After you successfully escape, Desch will give you the spell Mini and join the party. You will then jump off the mountain end up in a new area on the world.

Some items are different, therefore, here's a full checklist: