Fang of Earth in hand, the Warriors of Light head to Doga's Manor. There, they receive the keys to the Forbidden Land, Eureka, and to the Crystal Tower.

Recommended party: the same as the previous chapter:

in the remakes, remember to carry a Rune staff with you (the Evoker can equip it).

Before you go to Doga's Manor, make sure you have plenty of Gold Needles in your inventory, since one of the bosses uses petrifying attacks.

As soon as you enter the manor, Doga and Unei teleport you to Doga's Cave.

The first floor has many branches. The short route is to the southwest; take a right at the first fork and left at the subsequent ones. Enter the door to a corridor, where there are two chests containing a total of 40000 Gil. On the second floor there are branching paths as well, but there are rooms at the end of them. In the rooms you can collect four Barriers. The third floor is a straight path to the room where Doga and Unei attack you.

The only monster worth paying attention to is the Nemesis, who can confuse the party members.

After you take a few steps into the manor, Unei and Doga create a teleport circle, and invite you to meet them in Doga's Grotto. You can take the opportunity to heal up at Doga's magic pot if needed. When you're ready, step on the teleport circle.

On the first floor, follow the path around, and take the stairs down to the next level.

Grab the chest right near the door for 10000 Gil, and follow the path around the east for another chest with 10000 Gil. Take the stairs down to the next level.

On the third floor, head west and take the first western path at the split. In the first room, you can find Lust Dagger, White Musk and Rising Sun. Return to the main room, and head east; there's nothing in the room to the south. Enter the room on the east path and grab the Chocobo's Wrath from the chest, then take the stairs down.

Grab the chest near the door for Phoenix Down, and follow the path around to the east for another chest with another Phoenix Down. Take the stairs down and heal up for the boss fight against Doga and Unei. 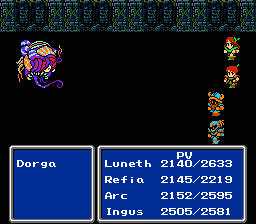 Doga attacks using magic only and is extremely resistant against magic attacks, including the Geomancer's terrain. You should take strong physical jobs (Viking and Dark Knight), move all your characters to the front row and attack using their weapons. The Bard and the Evoker are always useful for support and healing.

Doga has much fewer HP than Hecatoncheir did, but the real challenge comes after you take him down. You have to fight Unei next! 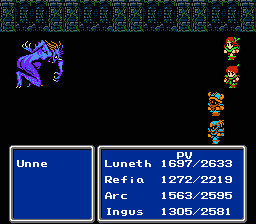 As soon as you defeat Doga, it's Unei's turn to challenge you. And guess what? You aren't healed between the battles. Good luck with that!

Like Doga, Unei is another strong magic user. Her moveset is a bit different between the NES and 3D versions of the game.

In the NES version, Unei casts: Tornado, which reduces the target's health to less than 10 HP; Blizzard, which deals damage to the entire party and Barrier, which increases her magic defense.

In the 3D versions of the game, Unei casts Aeroga, Tornado, and Blizzard, as well as the supportive Reflect, Protect, and Haste, making her much more difficult than in the NES version.

Continue to have the Dragoon jump, and toss Hi-Potions to the rest of the physical attackers with a Scholar. If Unei gets Protect, Reflect, or Haste off, Study the effect off of her.

After defeating Doga and Unei, you receive the key to the Forbidden Land, Eureka, and the Syrcus Tower key. The Warriors of Light watch in horror as Doga and Unei vanish before their eyes, but the two warn the heroes that even if their bodies fade, their souls live on.

Make sure you've opened every chest before moving on, since you cannot return to Doga's Grotto later.